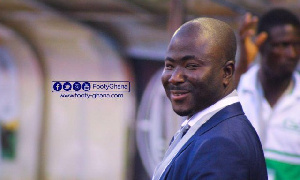 Spokesperson of the GFA, Tamimu Issah

The Spokesperson of the Ghana Football Association (GFA), Tamimu Issah says plans are underway to appoint coaches and restructure the national teams following the dissolution of technical staff.

In an interview with Joy News’ Komla Adom, Mr Issah indicated the association has adopted a review plan to ensure the vacuum created does not prolong.

“The black stars have a game in March and since all the technical staffs of the various national teams have been dissolved, whatever plan or road map we have in mind will take into consideration the Black Stars’ next assignment and any assignment of the other national teams.

GFA in a statement on Tuesday, January 2, 2020, dissolved the technical teams of all national teams. The decision affected both male and female national teams.

The gesture was to show the intent of the new FA starting the development of the national sport on a new slate.

The spokesperson argued the timing of the dissolution was purposeful to ensure the smooth running of football in the country.

“The action is being done at a time where international football is on break. So it is not going to affect the smooth run of national teams particularly the black stars,” he stated.

Commenting on the prospective coach being a foreigner or Ghanaian, Mr Issah said the FA’s vision is to get a team manager that can lift the image and performance of the national teams and not necessarily the origin of the person.

“At the end of the day, we want the best for Ghana football. And I believe that whatever decision that the FA will take will be in the best interest of Ghana football regardless of who is managing the national team whether a local coach or a foreign one,” he stressed

Speaking to some football lovers on their expectations from the next coach, one highlighted the person should formulate a team that can score penalties and win games.

“Penalties have always been one of Ghana’s weaknesses,” he said.

Another also wanted the coach to be a Ghanaian, adding that “we have spent so much money on foreign coaches and they have also not won us any cup.”