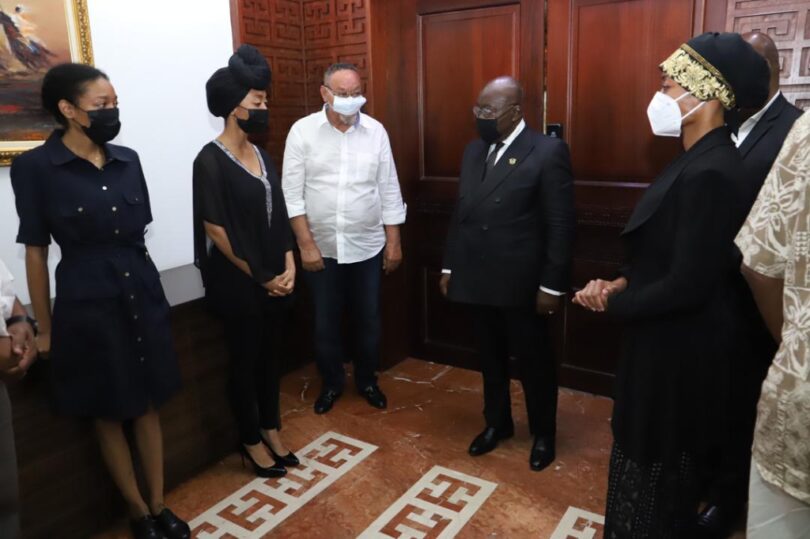 President Akufo-Addo has announced a state burial for the late former President Jerry John Rawlings who died on Thursday, November 12.

According to the President, the Chief of Staff, Frema Osei Opare and the Rawlings family will meet to decide a date for the state burial.

He made the comment when the family of the late ex-president officially informed him about his death at the Jubilee House in Accra.

The daughters of the late President, Yaa Asantewaa Rawlings, Amina Rawlings, and Dr. Zenator Agyemang-Rawlings who is also the Member of Parliament for Klottey Korle Constituency were all clad in black.

“I am extremely disturbed and saddened by his passage. He was not an ordinary Ghanaian…and therefore his passage has to be a matter for the Ghanaian nation,” President Akufo-Addo said after the news was delivered to him.

The President then directed the Chief of Staff, Madam Frema Osei Opare to liaise with the Rawlings family and draw up a plan for his burial.

“I know the feeling of family on such an occasion and I think that you will understand that on the death of such a man, precedence has to be given to the state of Ghana. The chief of staff will be in contact with Colonel Agbotui to make sure he’s given a befitting exit,” the President said.

“I am determined to do that and his contribution to this country’s history is there for all to see. And at the end, if he’s had to leave, I think a grateful nation should show its appreciation of him in the manner that it organises his send off,” President Akufo-Addo added.

Meanwhile, sources say the 73-year-old statesman died after he contracted Covid-19 and was rushed to the intensive care unit of the Korle-Bu Teaching Hospital in Accra.

He left behind a wife, former First Lady Konadu Agyemang-Rawlings, and four children Zanetor, Yaa Asantewaa, Amina, and Kimathi Rawlings who is the only male child.