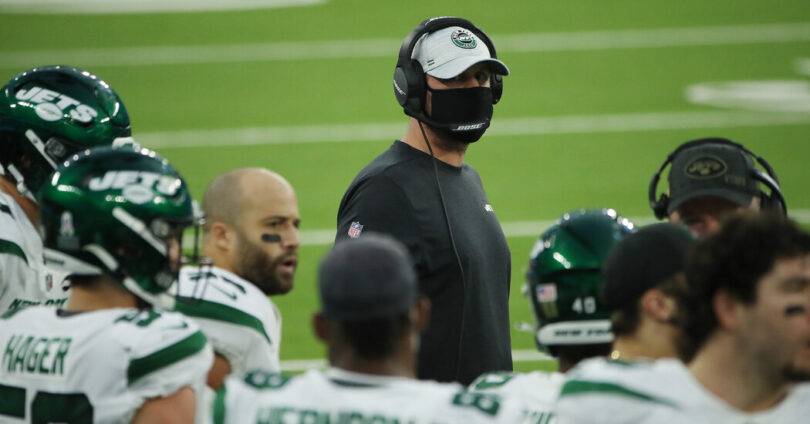 Adam Gase’s ongoing employment as the Jets head coach adheres to a questionable principle: If you can’t be good at your job, be so thoroughly, defiantly terrible at it that your superiors think that you must be doing something right.

The 0-11 Jets rank dead last in the N.F.L. in points and total yards. Football Outsiders calculates a 32.6 percent chance that they will finish the season 0-16. Sam Darnold, the would-be franchise quarterback Gase was hired to develop, has regressed so badly that he appears unsalvageable. The only reason to watch the 2020 Jets is to experience the shameful thrill of rubbernecking a turnpike pileup. Yet Gase retains his job, even though Bill O’Brien and Matt Patricia, his peers in coaching ineptitude, have already been fired this season by the Houston Texans and Detroit Lions, respectively.

The Jets’ 20-3 loss to the Miami Dolphins last week was punctuated by a farcical postgame controversy. Gase turned play-calling duties over to longtime assistant Dowell Loggains in late October, and Loggains appeared to be growing into the role when the Jets scored 55 combined points in narrow losses to the New England Patriots and Los Angeles Chargers. But on Sunday, Gase again wielded the headset and play sheet, the crown and scepter of play-calling power, and the Jets were held to 10 or fewer points for the sixth time this season.

It looked as though Gase had seized back authority from his semi-impressive subordinate the way Michael Scott of “The Office” might do if Dwight Schrute led Dunder Mufflin to two profitable weeks of paper sales. Yet Gase spun a curious tale in his postgame news conference that Loggains selected plays and relayed them to Darnold through Gase, with the head coach taking over on third downs and in two-minute situations. “It’s not hard. This is not hard,” Gase insisted.

Perhaps Gase really has innovated an atypical and stunningly impractical new play-calling procedure. His postgame explanation seemed as if he were trying to Jedi mind-trick observers into doubting the obvious.

Gase’s entire head coaching career, dating back to his three seasons with the Miami Dolphins, has been a tour de force of blame deflection and expectation tempering. He has appeared to alienate star players until they were branded as underachievers or malcontents. His organizational philosophy seems to hinge upon scapegoating departed coaches or executives (like former Jets general manager Mike Maccagnan, who ran the team from 2015 to 2019 and deserves plenty of blame), creating buffers to insulate him from accountability (the Jets’ current general manager, Joe Douglas, appears to fit this bill) and retaining assistants who are no threat to his authority (Loggains, until last week).

On the field, Gase’s game plans hew strictly to Zeno’s Paradoxes: The offense always strives to gain half the distance needed for a first down, even if it means calling an 18-inch pass on 3rd-and-1. It’s a system which was only successful when Gase coordinated Peyton Manning’s Denver Broncos offense in 2013 and 2014. Like O’Brien (who coached Tom Brady during the late-middle of his career) and Patricia (who in 2017 helped a Patriots team that always wins the Super Bowl to almost win the Super Bowl), Gase successfully parlayed a brief brush with a Hall of Famer into a head coaching career. But Gase has proved more adept than the others this season at sidestepping consequences.

Gase thrives within an atmosphere of Jets fatalism: teams are so bad this year that they have no choice but to wait for next year, yet they cannot expect to compete next year because they were so bad this year. Perhaps that’s what both the Jets and the Dolphins saw in him: After 20 years of Patriots dominance, A.F.C. East teams have been conditioned to institutionalized hopelessness.

Consider how the Jets recoiled from their modest success in 2019. Most teams would have built upon going 6-2 in their final eight games of the season by upgrading the roster. Gase found reasons to jettison wide receiver Robby Anderson, safety Jamal Adams and (earlier this season) running back Le’Veon Bell, three of the team’s only proven veterans/trade assets.

As a result, the 2020 Jets were custom-built to fail, making it easier to justify weekly humiliations and Darnold’s stagnation. Gase may not actually be trying to fail, but it’s difficult to pinpoint what someone would do differently if they were.

The greatest testament to Gase’s near-willful ineptitude is not the Jets’ current failure but the success he has left in his wake. Ryan Tannehill, whose career flatlined under Gase in Miami, is now a Pro Bowl quarterback for the 8-3 Tennessee Titans. Adams leads the 8-3 Seattle Seahawks in sacks. Anderson ranks fourth in the N.F.L. with 75 receptions for the Carolina Panthers. Bell is a contented role player for the mighty Kansas City Chiefs. And many of Gase’s former extended-stay doghouse residents are having productive seasons for the 7-4 Dolphins.

Perhaps that means that there is hope for Darnold, and that the Jets can slingshot toward relevance once Gase is (inevitably?) gone. .

If life tends to get better in the post-Gase era, the Jets should consider hastening its arrival.