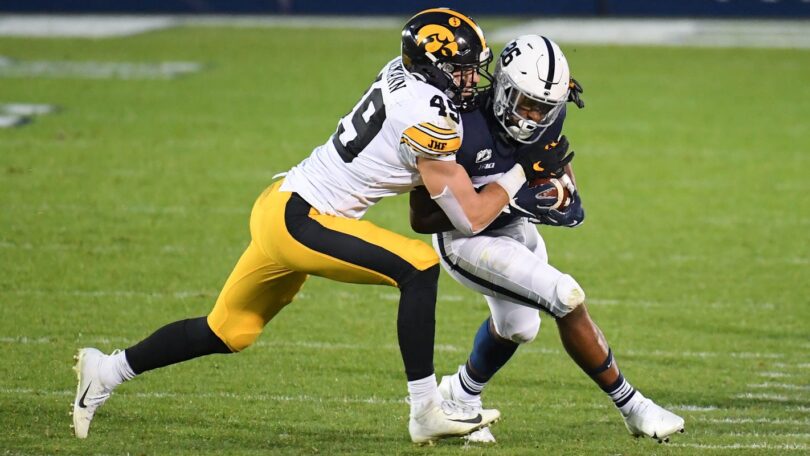 STATE COLLEGE, Pa. — They seemingly tried everything to hold themselves up with their season flying through their fingers.

Keep losing star players? Unload the bench and play one freshman after another in hopes of a spark.

Need something to push an offense led by a backup quarterback and freshmen running backs? Keep going for it on fourth down.

And yet it still felt so desperate it came to this for a Penn State defense begging for anything to help itself: Safety Lamont Wade running down the field, without his helmet, holding the ball up for everyone to see after wrestling an Iowa receiver to the ground late in the first half … except it wasn’t actually a turnover.

The solid-but-unspectacular Iowa Hawkeyes scored a few moments later and rolled downhill during the rest of Saturday’s latest beatdown in Beaver Stadium.

By the end, Penn State got drilled by a 41-21 score with barely a couple of hundred of family and friends watching in the stands.

Penn State is now 0-5 for the first time in school history — since it started playing football here in 1887.

While only a few preseason top-10 teams had ever started 0-4, the Nittany Lions are the only one to ever lose their first five.

Penn State is the first team to start the season 0-5 after being ranked in the top-10 of the preseason AP poll (preseason poll began in 1950).

Dating back to last season, PSU has allowed 30+ points in 6 straight games, double any other streak in school history. pic.twitter.com/MU9pSbTsIb

At this point, the problems spread throughout the offense and defense appear more insurmountable by the week. Everything they attempt to accomplish appears excruciatingly difficult, from basic tackling to protecting their quarterback to finding any sense of rhythm when they have the football.

It became an even more difficult situation with star tight end Pat Freiermuth missing the game with an undetermined injury. That makes three potential All-Americans missing for various reasons before the fifth game of the season (joining linebacker Micah Parsons and running back Journey Brown).

And despite some increased team energy early, each time the Lions forged ahead on Saturday, even in some small way, they immediately malfunctioned.

More Big Ten: In loss to No. 3 Ohio State, Indiana proved that this season it is no fluke

A 7-3 lead early — Penn State’s first lead of any kind since the opener — was given away by a defense that couldn’t rattle one of the most ineffective quarterbacks in the Big Ten.

When the offense had a shot to gain momentum and keep it close early, they went for it twice on fourth down and failed on each.

Another time, a simple pitch from the quarterback to the tailback went awry, the Hawkeyes recovered and scored soon after.

Get a great defensive stop to start the second half? Backup quarterback Will Levis was promptly hit from behind trying to pass, fumbled and Iowa got it right back.

The next time they got the ball he was hit and fumbled again. Despite completing 13 of his first 16 passes, Levis somehow still didn’t look up to rallying his team and was benched.

Even when former starter Sean Clifford returned and provided a stunning spark with touchdowns on his first two passes, the awful reality of this sinking season flooded back soon enough.

On his third drive, with his team down only 10, one of his passes was batted up at the line of scrimmage and intercepted.

The third turnover of the day for a team that can ill-afford the least bit of adversity at this point.

Even when there seemed to be some faint breaks of light, of season-turning hope, it was washed away just as quickly.

Maybe it was a bit fitting that it ended like this, Clifford desperately trying to lead his team down for a late score, trying to salvage something of the day — when his sideline was pass was picked off again.

Big fellas aren’t supposed to be able to run like this.@DaviyonNixon is not your typical big fella. #B1GStandout

By a 300-pound defensive tackle.

Which really left nothing more left to say, once again.