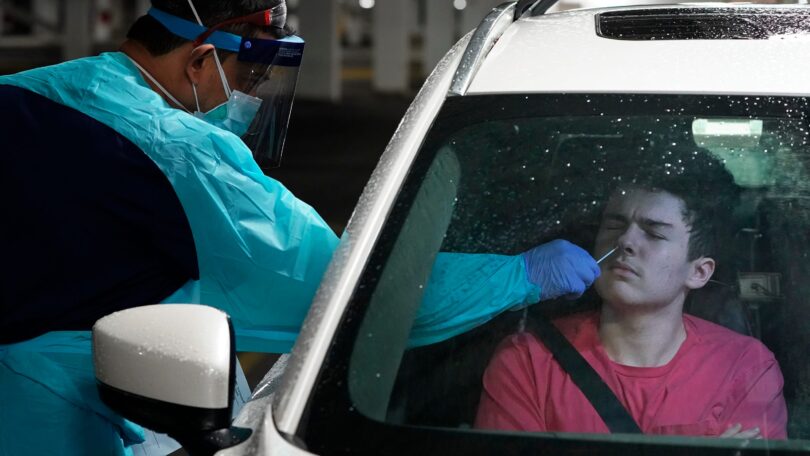 Skiing and snowboarding aren’t your only seasonal sports this winter. Try these obscure winter sport suggestions to fulfill your COVID Christmas!

Los Angeles won’t be shutting down its COVID-19 testing site in Union Station on Tuesday after all, while Atlanta still plans on allowing “Spider Man” to shoot in closed high schools.

Filmmaking is back. Cue outrage.

In Los Angeles, the testing sight had been set to shut down to allow Miramax to film some scenes for the movie “He’s All That.” The romcom shooting schedule ignited a frenzy of dramatic dissent, and a few hours later Mayor Eric Garcetti tweeted that “my team has worked to reopen testing at Union Station on Tuesday.”

In Atlanta, where classrooms are shut down in favor of virtual learning, a production team and cast of “Spider-Man” received special permission from Atlanta Public Schools to film at two high schools starting as soon as next month, the Atlanta Journal-Constitution reported. The approval came after the movie’s location manager “dangled a $50,000 incentive,” the Constitution wrote.

Christie Johnston, a teacher and mother, tweeted: “In person school is not only safe, it’s necessary for learning. Too bad kids don’t generate the millions a movie does, or they’d be back in front of their teacher in a classroom rather than a computer screen.”

Here’s what to know Tuesday:

📰 What we’re reading: These four states have been hit hard by COVID-19 yet balked at restrictions and mask mandates. What is it like to live there?

An advisory panel of the Centers for Disease Control and Prevention meets Tuesday to vote on who should get the first doses of a COVID-19 vaccine. Front-line health workers will be first in line. First responders, long-term care patients, people with underlying conditions, people over 65 and essential workers are also being considered. Each state ultimately makes the decision based on the panel’s recommendations. The FDA will consider the first vaccine candidate Dec. 10; Vice President Mike Pence told governors the first vaccines could be shipped out in two weeks.

“We strongly believe the vaccine distribution process could begin the week of Dec.14,” Pence told governors, according to a summary of the call provided by Washington Gov. Jay Inslee. “The American people deserve to know the cavalry is on the way.”

It can’t get here fast enough. In November alone one of every 76 Americans tested positive for coronavirus. The country reported 36,918 coronavirus deaths for the month, a toll greater than American losses in the Korean War.

A small town in southern Spain is carrying out COVID-19 testing on its entire population after a random screening suggested 70% of its inhabitants were infected with the virus. Public health officials made the decision after 130 out of 182 people tested on a single day in Cuevas del Becerro were positive for the virus, EuroWeekly News reports. Mayor Ana Maria Garcia, among those who tested positive in the town of about 1,600, said residents will be called by phone or SMS and if they fail to show up they could be charged with a crime against public health. Local authorities have set up a volunteer service to distribute food to residents.

CDC warning serves as another hit for traditional stores

Brick-and-mortar malls and stores have struggled in recent years amid the boom in online shopping, but they could usually count on big crowds during the Christmas season. But there may not be a holiday reprieve this year. The U.S. Centers for Disease Control and Prevention says holiday shopping in crowded stores is a “higher risk” activity and that people should limit any in-person shopping. Instead, the agency recommends shopping online, visiting outdoor markets or using curbside pickup, where workers bring orders to your car. Try to spend as little time inside stores as possible, says Dr. Isaac Weisfuse, a public health expert at Cornell University.

“You just want to go in and out,” he says. “Get your shopping done and move on.”

Woodrow Rosenbaum, chief data officer for Giving Tuesday, said giving is up 20% year over year in all categories to both nonprofits and small businesses – despite the decline in the first quarter. “The pandemic is motivating a lot of generosity,” he said. “People are finding generosity as an antidote to fear, uncertainty, division.”

If you are unable to give financially or otherwise this year, Rosenbaum suggested virtual volunteering, letter-writing campaigns and even sidewalk chalk messages as safe options amid the coronavirus pandemic.

Generosity, an ‘antidote’ to fear, division’: How to help those in need on Giving Tuesday

Canadian Prime Minister Justin Trudeau’s government vowed Monday to spend billions more to help the country recover from the pandemic. The cost to date has the federal deficit reaching a record $381.6 billion Canadian ($294 billion) this year, but the government said it could close in on $400 billion Canadian ($308 billion) if widespread lockdowns return in the coming weeks. Toronto, Canada’s largest city, is on lockdown.

Deputy Prime Minister and Finance Minister Chrystia Freeland said Canada entered the pandemic in the strongest fiscal position of any G7 country. “We can afford the investment,” Freeland said.

A modified stay-at-home order begins Tuesday in Anchorage, the largest city in Alaska. The order begins at 8 a.m. local time and is scheduled to go until Jan. 1, 2021. The new order requires restaurants and bars to shut down indoor dining. Takeout, delivery and outdoor dining are still allowed with some restrictions. Indoor gatherings are limited to six people and outdoor gatherings at 10 people. Gyms and fitness centers will go from 50% capacity to 25%.

Acting Mayor Austin Quinn-Davidson announced the new order last week as the city experienced a “record-breaking surge” of coronavirus cases. Former Mayor Ethan Berkowitz issued a similar order in August for a “four-week reset,” according to the Anchorage Daily News. Anchorage has over 16,500 infections and 68 deaths, according to state data. Statewide there are over 31,000 confirmed cases and 120 deaths.

Florida public schools will remain open in 2021 and families will continue to have the option to keep students at home during the COVID-19 pandemic, Gov. Ron DeSantis announced Monday.

But the news came with one caveat: parents with students who are struggling academically in remote learning situations will be notified by their school districts and the students will be required to return to in-person instruction – unless the family again actively elects to keep the student at home. The caveat is part of a new emergency order issued by Richard Corcoran, Florida’s commissioner of education.

DeSantis at a press conference called closing public schools during the coronavirus pandemic the “biggest public health blunder” in modern U.S. history and called his detractors “flat-earthers.” He said the effects of closing schools will be felt for years.

The announcement comes as Florida has seen a surge in cases in past weeks and is poised to cross the million-case mark on Tuesday.

Michigan Rep. John Chirkun on Monday said he has tested positive for the coronavirus. Chirkun, a Democrat, is at least the 11th state lawmaker to have either a confirmed or suspected case of COVID-19.

“Rep. Chirkun is doing well and in very good spirits. I wish him a speedy recovery and look forward to him returning to session following his quarantine,” fellow Democrat and House Minority Leader Christine Greig said in a statement.

Greig said Chirkun will not attend meetings at the state Capitol this week, which the state Legislature is scheduled to return a two-week break. The diagnosis comes at the same time businesses around the state face strict operating regulations and Gov. Gretchen Whitmer wants lawmakers to pass a $100 million COVID-19 relief plan.

Gov. Gavin Newsom warned a stay-at-home order could soon be implemented in counties with widespread COVID-19 transmission if they continue to see a surge of new cases that could potentially overwhelm local hospital systems.

In the past two weeks, COVID-19 hospitalizations across the state increased 89% while COVID-19 patient admissions into intensive care unit beds increased 67%. But that rise is just the tip of the iceberg, officials said.

“We anticipate another large increase in cases within the next one to two weeks from Thanksgiving activities and gatherings,” Newsom said.