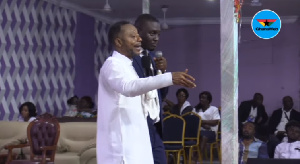 Founder and leader of Glorious Word Power Ministry International, Rev Isaac Owusu Bempah on the final day of the last decade made some startling revelations about things which he said were bound to happen in 2020.

In what has become a culture by the man of God during his December 31 watch night service, several Ghanaians throng his edifice in anticipation of theirs as well as the country’s ‘fate’.

As expected, Rev. Owusu Bempah did not disappoint as he outlined some prophecies which had been revealed to him.

The prophet cautioned the incumbent party, of which he’s an ardent empathiser, that they should be wary of complacency in the December elections. Rev. Owusu Bempah intimated that although the victory of the New Patriotic Party had been confirmed in the heavens, there was the need to work very hard.

He noted that the party has to put in more effort in the build-up to the elections to enable them retain the seat.

He also disclosed that there were plans to eliminate the Chairperson of the Electoral Commission, Madam Jean Mensa and called for security to be beefed up around her. He added that an earlier attempt had been done spiritually but he intervened to save her, stressing that she was not out of the woods yet.

The incident of deaths seems to have been a major part of his prophecies as he further stated that three staunch members of the NPP, him included would also die this year if fervent prayers were not offered.

He asked the security agencies and Ghanaians in general to be more security conscious as there was the propensity for the country to be hit with a terrorist attack.