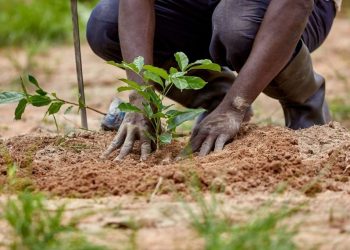 Over 8,000 seedlings raised for this year’s Green Ghana Day project have been found at a refuse dump site near the Offin Forest Reserve at Bosofuor in the Asante Mampong Municipality of the Ashanti Region.

Officers of the Forest Services Division of the Forestry Commission at Asante Mampong during their daily routine saw a KIA truck moving out of the refuse dump site, but they later found the seedlings dumped there.

Efforts to trace the vehicle were not successful.

Chief Executive Officer of the Forestry Commission, John Allotey was in the area to inspect the success of seedlings planted under the Green Ghana Day project and ascertain reports of the dumped seedlings.

“We received reports that the seedlings had been dumped at a refuse dump in Mampong district in the Ashanti Region. We needed to come here with my team to confirm first-hand. We got here this morning and the information we got from the District Manager is that on the 28th of July, whilst the forest guards were going round to inspect trees that have been planted, they heard the sound of a truck close to the forest reserve. They decided to move in that direction. As they approached, the truck moved away, they went close to the site and saw the seedlings on a refuse dump.”

Police at Mampong however said investigations have begun into the incident