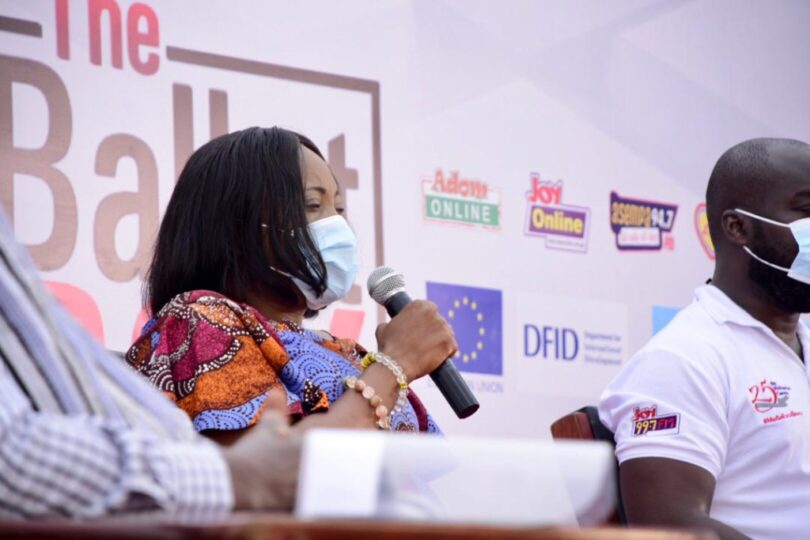 Constituents along the Eastern Corridor road have warned of voting against government if work on the pothole-ridden and abandoned portions of the famous access route linking the southern part of the country directly to the Northern sector is not completed before the December 7 elections.

According to an aggrieved participant at this year’s maiden Ballot Box programme held in Hohoe, they ‘will show them (politicians) in this year’s election for taking us for granted’.

Over 40% of votes cast in the Joy Ballot Box focused on the poor state of the Eastern Corridor road which runs through the Hohoe municipality and adjoining constituencies in the Volta Region.

These include Kpando and Afadzoto-South constituencies which also participated in the Ballot Box conversation.

A taxi driver who plies Hohoe -Gwolokwati stretch told JoyNews that ‘if he (President AkufoAddo) comes to do something small about the road, he will get a lot of votes here’.

Responding to concerns of electorates at the JoyNews outdoor community interaction, July 10, a member of the panel, Member of Parliament for Afadzato South, Angela Oforiwaa Alorwu-Tay admitted ‘the Eastern Corridor Road is big issue’ but blamed the NPP for failing to continue the work started by the late President Mills and Mahama-led administrations.

Her opponent, Ernest Quist, who is NPP Parliamentary Candidate for the area as well as the District Chief Executive for Kpando Constituency dismissed her argument, insisting that, President Akufo-Addo has since assumption of office in 2017, sustained work on the stretch which ‘is 90% complete’ now.

He referred to the Jasikan route as proof. Mr. Quist quizzed, ‘get to Jasikan and see, are we saying work is not ongoing there’. Unsatisfied with the responses from the political representatives, some of the constituents took to the microphone stand to express their displeasure with the manner in which they felt their welfare were being toyed with by politicians.

One person noted, ‘we want politicians to know that we are all Ghanaians, so when they come to power they should do the right thing at the right time and act like former President Dr. Kwame Nkrumah’.

Recounting his experience on the road as a student, another young man pointed out that there was no construction until the later part of 2015 when the government at the time “brought machines and contractors onto the road and scattered them all over the districts along the Eastern Corridor Road” – ‘politicians have taken us for granted in the Volta region,’ he lamented.

He warned that if the road is not completed before this year’s election they will vote out the current government.

Meanwhile, persons with disabilities demanded to know the plans of the aspiring candidates to implement policies enabling automatic employment of members, integration of sign language communication into all public and private services such as hospitals, banks, and police stations among others.

President of the Volta Regional Federation of Persons with Disability, Elolo Agyei questioned taxation of the Disability Common Fund which according to him, is supposed to be a token for poverty alleviation among members just like the Livelihood Empowerment and Poverty Alleviation Programme (LEAP) beneficiaries.

“That LEAP is not being taxed, but the Disability Common Fund is being taxed; what would they do to reverse the trend when they are elected?’’ Mr Agyei asked.

Security and business development for women

Women represented by the Queen mothers of the land and market women demanded peace, security for their children and development of their market centres.

The Hohoe Market Queen, popularly called Sister Becky, sought to know from the Hohoe Municipal Chief Executive the identity of persons or institutions funding the construction of the new market. Not convinced about earlier responses by the MCE on the subject.

Sister Becky exclaimed, “I want to know the fact. Is it the World Bank which is building the Market or it is the Municipal Assembly?!’’

In response, the MCE, Teddy Ofori explained, the World Bank funded the Assembly to enable it undertake the new market construction, for that matter, the Assembly must be credited for initiating the project.

Former MCE and NDC Parliamentary Candidate for Hohoe Professor Margaret Kweku assured the electorates that she is the best candidate to bring them their desired development. She referred to various projects she put in place during her time as the then Municipal Chief Executive of Hohoe.

She cited rehabilitation of key roads in the municipality, market structures and construction of the first mechanized borehole for the provision of potable water in Hohoe.

Professor Kweku believes she is better placed than the NPP’s Peter Amewu to elevate the Hohoe Municipality to the global level.

The youth took turns to question the state actors on employment, youth and ICT development. Education was third among issues the people indicated will influence their choice of candidates in this year’s general election.

District Chief Executive of the Afadzato South Constituency who is the NPP Parliamentary Candidate for the area, Mr. James Etornam Flolu outlined various initiatives he will undertake to promote job creation and youth development as measures to discourage rural-urban migration particularly among the youth searching for greener pastures.

Mr. Flolu assured the constituents that, should he be voted into parliament, he will ensure that existing opportunities and tourist facilities in the constituency are developed and tapped for the benefit of the youth.

The Ballot Box Programme is aimed at providing a common platform for the electorates and their political representatives to meet and discuss issues of concern to them as the elections draw near. It also aimed at promoting an issues-based election 2020 with special focus on promoting active participation by the vulnerable.

Some participants described the Joy Ballot Box platform as ‘the Presidential Debate which has been decentralized’ to enable MPs engage directly with the electorate to listen to their concerns’ and provide tailored solutions for the expected development.

This came from the MP of Afadzato South, Angela Oforiwaa Alorwu-Tay who is advocating immense support for the programme to dissuade politicians from taking electorates for granted particularly as the December 7 polls draw near.

Election Headquarters through its Joy and Adom brands hopes to draw women, persons with disability and the youth into electioneering engagements to enable their voices to be heard as well as ensuring that their needs factored into the manifestoes of the various political parties for attention.

Ten regions will benefit from this year’s Ballot Box programme in selected communities across the country. The Joy Ballot Box is supported by the Star Ghana Foundation with other funding support from development partners such as the UKAid, European Union.