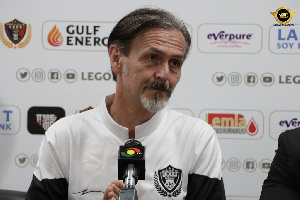 The Royals host the Miners on Wednesday in matchday four of the Ghana Premier League at the Accra Sports Stadium.

Ashantigold have been resolute in defence and are yet to concede a goal, having won all three of their games.

Goran Barjaktarevic is determined to secure his first win with the club but insists their primary target will be to score first.

“I expect my play to want to play and win,” he said at the pre mtach conference. “Because if you are a sportsman you always want to win.”

“Nobody prepares to lose a match. Everybody prepares to win like we do. Our first goal in this game is to score against our opponents because they haven’t conceded any goal.

“That is the first issue we want to reach and how it will finish in 90 minutes, we will see.”

Legon Cities FC have two points from three games, after two draws and a defeat. However, the Royals are poised for a first win on Wednesday.

Ghanaian rapper Kwesi Arthur has been billed to perform at half time as part of the club’s initiative to entertain the crowd.