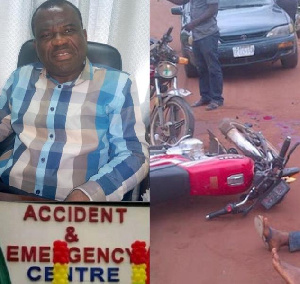 The accident recorded 20 Okada accident cases during the Christmas celebrations

Records at the Accident, Emergency and Orthopaedic Department of the Korle-Bu Teaching Hospital show that commercial motor (Okada) riders top the number of road traffic accident cases during the Christmas and New Year celebrations.

On December 22 and 23, 2019 the Korle-Bu Hospital admitted 30 road traffic accident cases, out of which 20 were Okada related cases.

The cases made up of soft tissue injuries (wound injuries) and major injuries, including; victims breaking bones, having head injuries, being traumatized and the possibility of others losing their lower and upper limbs through amputation.

In an interview with Dr Frederick Kwarteng, the Head of the Accident, Emergency and Orthopaedic Department, Korle-Bu Teaching Hospital, he said the high number of Okada cases were because of reckless riding and speeding to get to destinations on time.

“Most of the accidents were caused by reckless riding, which led to losing control and falling off the motorbike or colliding with innocent pedestrians and objects or vehicles with the motorbikes.”

Some of the riders had accidents while riding under the influence of alcohol, and therefore had a severe collision, which led to them totally crashing their legs, he said.

By this, Dr Kwarteng said they would need to be on admission for a long period to enable the physicians to save their bones and manage the soft tissue injuries through several surgical processes.

“We will fix the bones with orthopaedic implants and conduct skin grafting to fix the wounds with tissues called flaps,” he explained.

As a result of the severity of some of the cases, he said, some of the victims could have their limbs amputated to save their lives if all procedures of treatment proved ineffective.

The Head of the Department noted that the patients, who would need an amputation, would be taken through pre and post-surgery counselling.

On his part, if it was not possible for the government to implement policies and instigate measures to regulate the use of Okada, then it should ban its usage in the country.

This, he believed, would help to reduce the huge number of road accident casualties recorded.

He said some of the treatment procedures for accident cases were covered under the National Health Insurance Scheme, but major processes like the procurement of orthopaedic implants and anaesthesia were not covered under the Scheme.