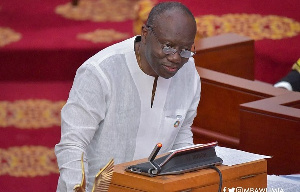 The Ministry of Finance is hoping to raise over US$3 billion in a Diasporan bond through the creation of the Diasporan Savings and Investment account.

The account which will also be known as the African Sankofa Account will enable people of African descent living outside the continent to lend to the government of Ghana for long term investment.

Speaking at a press conference, the Minister of Finance Ken Ofori-Atta maintained that the government is taking advantage of the successful Year of Return initiative to urge Africans in the diaspora to invest in Ghana.

Mr. Ofori-Atta stated that there is the need for Ghana to look at other areas of raising funds while encouraging Africans in the diaspora to own a part of the developmental growth.

“It’s really the complexity of having a bond that is retail oriented. There are too many rules and given the country’s grade it then becomes a difficulty except for sophisticated investors and therefore you make an institutional bond infiltration”.

Mr. Ofori Atta was of the view that with the value of remittances to Ghana, the government could encourage Africans in the diaspora to invest in the bond to make some returns.

“So, our expectation is that even if we were to look at the level of remittances that we experiencing which hopefully this year will be over US$3 billion. Our deep feeling is this new account will rival that in a period of a year or two”.

According to the Minister of Finance, it is relying on the successful Year of Return initiative announced by the government in 2019 to encourage Africans living outside the continent to invest in Ghana.

The Year of Return initiative was announced by President Akufo-Addo to urge Africans in the diaspora to visit Ghana to mark 400 years when the first slave ship left the shores of Ghana.

Meanwhile, the Minister for Tourism Barbara Oteng-Gyasi says different groups of Africans in the Diaspora have been sensitized ahead of the announcement of the African Sankofa Account.

“Our programme going forward which was also launched by his excellency the president in December is the Beyond the Return, which has about seven major pillars that we are going to work on and the first major one is the investment, giving the opportunity for the global African family to invest in African through a bond or any other investment vehicle which the Ministry of Finance will deem appropriate”.