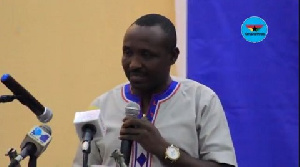 General Secretary for the ruling New Patriotic Party (NPP), John Boadu has indicated that President Nana Addo Dankwa Akufo-Addo will not go unopposed if he decides to contest for a second term in the 2020 Presidential Elections.

According to him, even though it is possible that nobody will contest him as all party members and executives have accepted he goes for the second term, the party’s constitution enjoins that nomination is opened for any qualified candidate to contest.

Speaking on Okay FM’s ‘Ade Akye Abia’ Morning Show, the NPP Chief Scribe mentioned that the party has decided to open nomination this very January for any interested candidate to pick up a nomination form which will be opened till March 2020.

He said vetting of the candidates including the President will follow after the closure of the nomination.

“We will present the vetting report for the National Council to accept before we go to elect the Presidential Candidate on April 25, 2020,” he indicated.

Per the NPP’s Constitution, John Boadu said that “even if nobody contests him, it doesn’t end there; we have to go for national congress to acclaim him as our candidate.”

Some members of the governing New Patriotic Party (NPP) is rooting for President Nana Addo Dankwa Akufo-Addo to go unopposed in the upcoming flagbearer contest in order to face the largest opposition National Democratic Congress’ (NDC’s) John Dramani Mahama in 2020.

Though the party has not made any concrete decision on the issue, some say the party will reject any candidate who wants to come up against the sitting President at the primaries.