Home » No money no football – Dong Bortey to Great Olympics 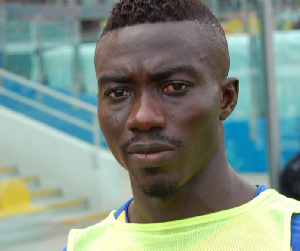 Bernard Dong Bortey is yet to feature for Olympics this season

Veteran striker Bernard Dong Bortey has ruled out the possibility of featuring for Accra Great Olympics until they fulfill their financial obligations to him.

The Accra based side announced before the start of the season that they had secured the services of the former Hearts of Oak striker who also confirmed the move at the time.

With three games played in the new campaign and with Great Olympics yet to register a single goal,the whereabouts of Bortey has become a more pertinent question.

In an interview with Graphic Sports, Bortey, disclosed that he was promised a financial package in his contract which the club has failed to abide by,thus his decision to stay away.

“I signed for a club and as part of my contract, I was due some financial benefit but as I speak to you now I haven’t received anything from Olympics,” he revealed.

“How can I feature for a club that I signed for without them paying me what I’m due? As it stands now, I am not ready to play for Olympics until they sort the financial aspect of my contract out,” he stated