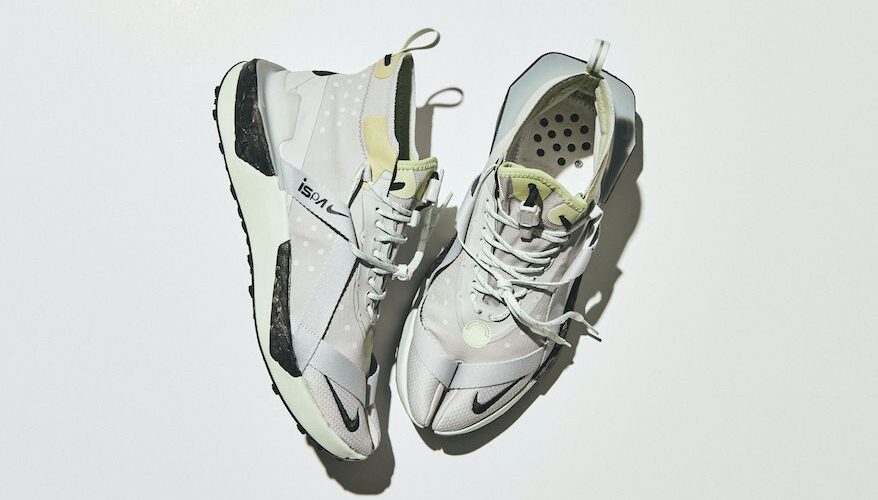 Experimental expression has a commercial home within Nike
’s ISPA philosophy. That expression includes a consumer-facing collection of footwear and apparel product launches that give Nike a singular take on designing for the urban environment.

Nike’s ISPA effort, born in November 2018, stands for the philosophy of improvise, scavenge, protect and adapt. The product creation, then, scavenges through every sport’s archive to improvise and adapt protective designs meant to focus on performance and utility for consumers not focused on a specific sport.

“This is built for the busy, big-city lifestyle,” says Nate Jobe, senior footwear creative director of Nike special projects. “We scavenge our archive a lot, find a city insight we need to solve for and go back to the archive and see if a sport did something similar. We will look into those things, dive in and take from that and create the new. I am proud to say if you remove the Nike Swoosh from ISPA you still see a Nike shoe.”

Darryl Matthews, senior design director, knows ISPA can work with and connect every design category within the brand. “We explore this line of thinking, working in close collaboration with all our colleagues across the business,” he says. “We utilize a vast portfolio of innovations, from Flyknit to React to Zoom Air.”

For upcoming ISPA releases, Nike plans to launch four new footwear silhouettes, all borrowing on technology or principles of past Nike mainline product, but each reinterpreted. Some of the reinterpretations will cycle back into a mainline release. The shoes launch includes the ISPA Zoom Road Warrior (releasing July 10), ISPA Overreact FK (July 9), ISPA Flow 2020 (Aug. 13) and ISPA Drifter (Sept. 1).

The Road Warrior was designed for the future of urban environments, says designer Nikita Troufanov, borrowing from running, basketball, training and outdoor. It doubles down on extra comfort, protection and durability with a double stack of Zoom Air and ideas taken from both Tokyo Olympic running prototypes and early Nike Shox prototypes to hollow out sections of the heel. The upper includes a split-toe configuration, knit sections and buckles for adjustment, all designed for high breathability and adjustability.

The Overreact is what Matthews calls “a gluttony of React foam.” With no sockliner or Strobel board, the foot sits directly on the floating top cloth atop the foam. “This shoe is seriously comfortable,” he says, “a giant hug for your foot.” Using pressure and density maps combined with foot strike data, designers devised where cushioning was most and least needed to create a series of interlocking internal geometries for the foam while giving the upper a mix of Flyknit yarn.

The Overreact will also release in a sandal version July 31.

Inspiration for the Flow came from extreme sport athletes and their approach to stripping away excess to “create the most lightweight, breathable shoe for our all-day, everyday athlete,” Mathews says.

Earl Stewart, computational footwear designer, says they leaned heavily into the improvise idea by reducing weight to create breathability and airflow. Using computational data, Stewart was able to perforate the outsole and create an open weave mesh on the upper without compromising performance, he says, offering stability and comfort for the urban environment.

The Drifter makes a play on a 1996 Japanese work boot with split-toe construction, external webbing to create stability and a tongue that cinches in the front and back. Using regrind Nike ZoomX foam — a component of Nike’s fastest running shoes —for a lightweight cushioning system, the Drifter plays heavily on scavenging materials.

As ISPA continues, expect the philosophy to grow as part of the Nike Design Exploration effort. “I’m really excited about evolving those narratives into much bigger collections,” says Shamees Aden, footwear designer. She notes the Flow includes a to-come weatherized version. “I am excited to see that come on and the future of ISPA to evolve the collections.”

While designed for the urban environment, Matthews says ISPA footwear is created with the same performance specifications as a typical product, so expects to see silhouettes used in a number of scenarios, from the urban street to hiking trails.

And just like Nike ISPA borrows from the archives, the mainline collection is already starting to take notice, “coming to our area wanting to scavenge our aesthetics and our technologies,” Matthews says. The Overreact, for example, and its tooling has already been earmarked for an inline product, the first ISPA product to go full circle and return to the mainline. As Nike ISPA leaders want it, the scavenging never stops.