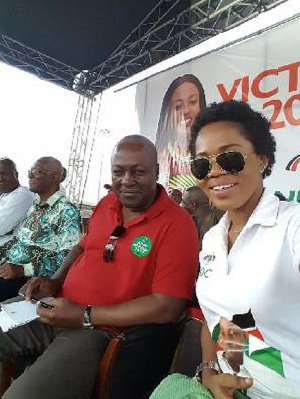 Mzbel is an ardent supporter of the NDC

The songstress in a post sighted by MyNewsGh.com revealed that about 70% of the prophecies released by the man of God were plagiarized from Popular Ghanaian Islamic Cleric, Numerologist, and Philosopher Mallam Sham-una Uztaz Jibril.

She is, therefore, advising members of the NDC to focus on working harder in order to win power than rely on plagiarized prophecies from so-called men of God including Prophet Nigel Gaisie.

“My people (NDC & JM) let’s focus on Hard work and Truth and Ignore all these so-called Men of God!! 70% of Nigel’s Gaise Prophecy is from Mallam Sham-Una’s private conversation with a few top people that Nigel knows… and even though the Mallam wanted to wait for a couple of research before putting figures out Nigel revealed the 52.1 % that the man didn’t want to put out yet!!! More filla coming up soon including personal heartbreaking and shocking experience with Nigel Gaise” She said

According to him, God is not pleased with the current government and therefore will ensure they lose the next general election.

He mentioned that if Ghanaians do not listen to the voice of the lord and boot out the NPP government led by Akufo-Addo, the country will experience what happened in 1983.

“The Lord told me that he has rejected this government and that if we don’t listen, we will go back to the days of 1983.”

“The Lord said through John Dramani Mahama, he’s going to place the nation at a good place. Every prophecy has an investment to make and if the NDC should plan, think and invest now, in the history of Ghanaian politics and in the history of prophecies in Ghana I don’t think God has given any percentage to any Prophet. I saw that the NDC will win the next Presidential election with 52.1%.” He claimed.