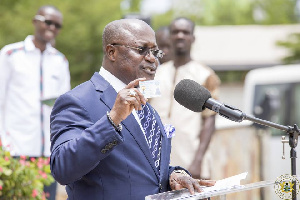 The family of a 26-year-old woman who lost her life after she was recruited by the National Identification Authority (NIA) for its ongoing Ghana Card registration exercise, is accusing the Authority of negligence.

Roseline Selorm Klu, a resident of Ashaiman in the Greater Accra Region, is believed to be among six recruits who have died of various ailments after falling critically ill in the Bono, Ahafo, Bono East, Upper East and Upper West Regions in the latter part of 2019.

The seven deceased persons consist of six Mobile Registration Workstation Operators, and one Commissioner for Oaths. Out of the six, two are women.

Aside from the six who allegedly died from malaria and through the consumption of contaminated food and water, one is said to have passed on after a motorbike accident in December 2019.

Roseline Klu, who’s to be buried on Saturday, January 11, 2020, is alleged to have died of suspected food poisoning at the Tema General Hospital after she had been transported from the Bono Region down south for further treatment.

Brother of the deceased, Alfred Klu, told Citi News the family suspects the girl may have fallen sick because the recruits were made to live under poor conditions.

“The NIA sent my sister and her colleagues to the Bono and Ahafo Regions. They didn’t provide adequate food, water and a proper place for them to sleep and so as a result of that, some of them including my sister had some components of food poisoning as the doctors say. And so she was brought home and while trying to treat it at the Tema General Hospital, she passed away.”

“As at now, the NIA hasn’t done anything about the funeral arrangements. All they came to request for in our house on Friday is the death certificate, which I wonder what they want to do with it No communication had come from them earlier before funeral arrangements were made, and I don’t know what they want to really do about this issue by requesting the death certificate to prove the death. The family is strongly of the view that the negligence of the NIA led to the death of my sister and the other six people involved”.

But the NIA has refuted the allegations of negligence.

ACI Francis Palmedeti, the Head of Corporate Affairs of the NIA, who declined to give further details about the circumstances leading to the deaths, told Citi News they are being investigated.

“Since we started the mass registration exercise in the Greater Accra Region, the NIA has engaged over 40,000 young men and women across the country, and is currently working with a workforce of about 15,000 in the Ashanti Region. These numbers are reflective of our broader society and these officials are subject to all the risks and hazards faced by other members of society.”

“The NIA will not discuss the details characterizing the loss of our personnel in public out of respect for the families of our departed colleagues, but vehemently objects to the assertion that their demise was as a result of negligence on the part of the NIA. Issues related to death are investigated by the police, and it’s only prudent that we await the findings of the police. The NIA would not shirk any obligation towards the bereaved families if the findings lead to any such conclusion”.

Some of the recruits for the exercise have often complained about poor arrangements that make their work and living conditions difficult.

The National Identification Authority, NIA, started the mass registration of Ghanaians in April 2019 in the Greater Accra Region before moving the exercise to other parts of the country.

The exercise, which has faced numerous challenges leaving thousands of applicants frustrated, is currently ongoing in the Ashanti Region.