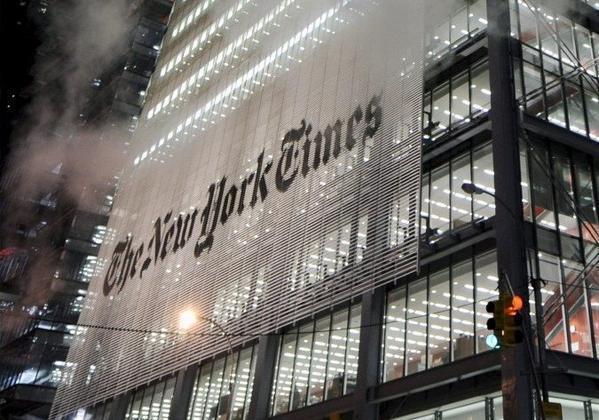 The New York Times on Sunday announced a shake-up, including the resignation of editorial page editor James Bennet, after a controversial decision to publish an opinion piece by a conservative senator who advocated for military force to quell civil unrest in American cities.

Wednesday’s inflammatory op-ed column by Sen. Tom Cotton (R-Ark.) was widely condemned within the corridors of the New York Times and among scores of readers.

The column, which ran under the headline “Send in the Troops,” focused on the rioting and called for the military to be mobilized to back up police. It came as the vast majority of the historic George Floyd protests were peaceful.

Hundreds of thousands of protesters have crowded city streets since Floyd’s death, demanding social justice and an end to racism and police violence. The multi-cultural throngs have amplified the Black Lives Matter movement.

At first, Bennet and New York Times Publisher A.G. Sulzberger defended the publication of Cotton’s piece, saying the paper wanted to provide a forum for all sides in an important debate. But as the hours wore on, and amid a swelling outcry, the paper retreated.

Late Thursday, the New York Times said the column did not meet its editorial standards and that a “rushed editorial process” led to its publication.

Bennet, who acknowledged that he hadn’t read Cotton’s column before it was published, stepped down Sunday.

“Last week we saw a significant breakdown in our editing processes, not the first we’ve experienced in recent years,” Sulzberger wrote in a note to staff, excerpts that were published by the paper. “James and I agreed that it would take a new team to lead the department through a period of considerable change.”

The shake-up is significant because Bennet was viewed as a rising star at the New York Times, and thought to be in position to succeed longtime editor Dean Baquet. The New York Times opinion section is managed by a staff separate from Baquet’s newsroom. Baquet is the former editor of the Los Angeles Times.

The paper’s flip-flop on the Cotton column invited more criticism. Cotton took to Twitter to blast the paper: “Does @nytimes have any standards left, beyond keeping the woke mob happy?”

Washington Post media critic Erik Wemple wrote a pointed critique under the headline: “Crisis of conviction at the New York Times,” in which he said that in just two days, the New York Times had “alienated staffers, readers, liberals, conservatives, free-expression absolutists of all political persuasions and Tom Cotton.”

Floyd died in police custody in Minneapolis May 25, after a white police officer knelt on his neck for eight minutes and 46 seconds. The officer, Derek Chauvin, and three fellow officers ignored Floyd’s dying pleas that he could not breathe. His death was captured on cellphone video, and the inhumanity of his death sparked the protests.

Within hours, dozens of New York Times staff members blasted the piece on social media channels, including Twitter. They and others tweeted “Running this puts black @NYT staff in danger” above a screenshot of the Cotton piece.

More than 800 staff members had signed a letter in protest to top editors and New York Times Co. executives, saying that Cotton’s essay contained misinformation and should not have been published. They argued that there wasn’t evidence to support Cotton’s depiction that “antifa” had infiltrated the protests.

Bennet joined the New York Times in March 2016 after serving as the top editor at the Atlantic for a decade. Before that, he spent 15 years at the New York Times, where he served as White House correspondent and Jerusalem bureau chief.

Bennet worked to bring in more conservative writers, including columnist Bret Stephens and editor and writer Bari Weiss. The New York Times and its staff are often a target for President Trump and his conservative allies; the president regularly describes the profitable, award-winning newspaper as “failing.”

But Bennet’s tenure was marked by a series of controversies, including last year’s publication of an anti-Semitic cartoon, prompting the newspaper to acknowledge that it had been printed without “adequate oversight.”

Two years ago, the section hired a technology writer only to discover that she had written about a friendship with a neo-Nazi and other questionable material. The New York Times then rescinded the job offer amid the backlash.

Sulzberger, in a statement, said: “James is a journalist of enormous talent and integrity who believes deeply in the mission of The Times. He oversaw a significant transformation of the Opinion department, which broadened the range of voices we publish and pushed us into new formats like video, graphics and audio. I’m grateful for his many contributions.”