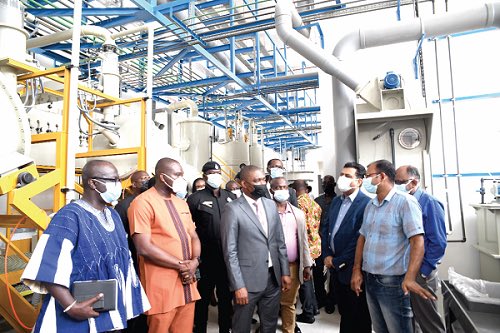 Barring any last-minute hitches, Royal Gold Ghana Limited (RGGL), a refinery in which the state has a 20 percent stake, will begin operation by the end of October this year.

The RGGL, which is a partnership between the Precious Minerals Marketing Company (PMMC) and Rosy Royal Limited, an Indian company, is located on the premises of the PMMC in Accra.

Currently, civil works on the facility are about 90 percent complete. What is left to be done is the installation of machines, which will begin in September.

The company has the capacity to refine between 300 and 500 kilogrammes of gold daily.

This came to light when the Deputy Minister of Lands and Natural Resources in charge of Mines, Mr. George Mireku Duker, visited the facility on Tuesday.

The acting Managing Director of the PMMC, Nana Akwasi Awuah, conducted the deputy minister round the facility.

The team toured the information technology department, the production unit, the showroom and other departments of the PMMC.

Nana Awuah said although the completion and operationalization of the refinery were delayed for almost a year because of the COVID-19 pandemic, it would start working “definitely before the year ends”.

“We are hopeful that by October ending we will begin to operate the refinery. The building is ready, the machines are ready and the Italian engineers who will install the machines will be in town by the first week of September to install them,” he said.

He explained that processes were underway to get London Bullion Market Association (LBMA) certification to facilitate international recognition of refined gold that would be exported from the country.

“The LBMA certification will mean that we will have to source our gold from responsible mining companies, and this is good because it will compel miners to mine responsibly,” Nana Awuah said.

He added that the PMMC was still struggling to clear its GH¢50 million legacy debt since 2017.

According to him, the entire legacy debt was made up of GH¢70 million and $5 million, “but we have been able to clear the dollar component and GH¢20 million of the cedi component”.

Nana Awuah added that the legacy debt was more of an albatross around the neck of the PMMC because the company was not financially sound to declare dividend to the state.

For his part, Mr. Duker assured the PMMC that the ministry would extend the needed support to the company and its partners to facilitate the LBMA certification.

He said the completion and operationalization of the RGGL would contribute significantly to job creation, particularly along the gold value chain.

“We are the leading producer of gold in Africa, yet we do not have that recognition on the international stage. We need our signature on the gold we export, and LBMA certification will give us the recognition we need,” Mr. Duker said.

He urged the PMMC to upgrade its facilities and premises to befit its status.