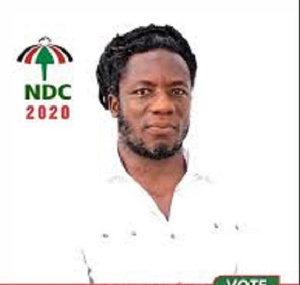 The National Democratic Congress(NDC) Parliamentary hopeful for Subin in the Ashanti Region, Linford Owuo, popularly known as Cedi has been found dead in his bedroom at Asafo in Kumasi Wednesday (today) morning, Kasapafmonline.com can report.

It is unclear what caused his death.

The family has officially reported the matter to the police for investigations.

The lifeless body of the NDC fanatic has been conveyed to Komfo Anokye Teaching Hospital for autopsy and preservation.

Linford Owuo is reportedly known for engaging in several questionable activities for the NDC in Ashanti region for many years.

In 2009, he was arrested and stood trial at a Kumasi Circuit Court for robbing Appiah Stadium who was at that time an NPP serial caller.

According to the facts of the case, Cedi, on Wednesday, March 4 purportedly took the laws into his hands and led an unprovoked attack on Appiah Stadium and burnt his Daewoo lenox salon car in the process valued at GH¢7,100 into ashes whilst robbing him of an amount of GH¢2,750.

Appiah Stadium, the facts stipulated was driving the said car along the Asafo roundabout around 11; 30 am on that day when Cedi, in the company of four-armed persons, allegedly stopped him and demanded his car keys.

Appiah Stadium who did not sense danger was said to have obliged and was subsequently forced into his car and was driven to Fante-New-Town, near O.A Transport Services area where he was later bundled into a waiting taxi cab.

His seized car and the taxi cab were afterwards driven to the Asem School Park where the suspect and his accomplices stole an amount of GH¢2,750 from the car and later set it ablaze burning it beyond recognition.

After the condemnable act, Appiah Stadium was driven in the same taxi cab from the Asem School Park through Amakom, heading to an unknown destination when he was fortunately rescued by some passers-by who heard him scream for help from the taxi.

Cedi who operates a gymnasium was arrested in his Fante-New-Town residence on Thursday, March 5, a day after he had allegedly visited mayhem on Appiah Stadium.

He was purported to have publicly disclosed that he was operating on the orders of Mr. Daniel Ohene Agyekum, an allegation which the Ashanti regional chairman of the ruling National Democratic Congress (NDC) has vehemently denied.

Cedi is alleged to have categorically declared that in as much as he continued to live, he would make sure that life became unbearable for activists of NPP in Kumasi, especially serial callers who call to defend the party and also criticize the ruling government.