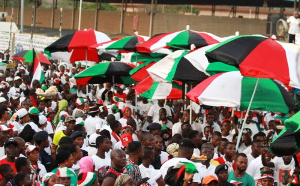 According to the NDC Communicator, music does not add to the votes of a political party.

This year’s general election, just like other previous elections, has seen celebrities coming out to endorse their preferred candidates.

Artistes have composed campaign songs for their preferred and favourits candidates.

This trend is nothing new in Ghana’s election.

But the question is are they doing these songs because they love and believe in the candidates or they are being paid for it?

Mr. Kenneth Kanor Opetoto, a member of the National Democratic Congress (NDC), has said the NDC has not contracted or paid any musician to do a campaign song for the party.

According to him, music does not add to the votes of a political party.

He believes what attracts votes is the brand and the ideologies of the party.

The NDC Communication Team member further revealed on Simply Showbiz hosted by MzGee on TV3 that even though Shatta Wale was part of their campaign trail in 2016, that did not make them win the election.

He said the NDC believes message sells more than the songs made by musicians.

“The message is the most important thing. You can have the best music but if your message does not go well with the electorates, you won’t win,“ he said.

Mr. Kenneth Opetoto said, however, that though the NDC has not contracted any artiste to do any campaign song, the party gives “something” to musicians who do songs that go with the party’s campaign.