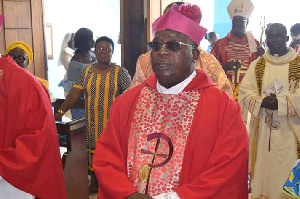 The Sekondi-Takoradi Diocese of the Catholic Church is shocked by the death of Monsignor Dr Francis Abuah Quansah, Vicar General of the diocese.

He died in the early hours of January 6, 2020, at the GHAPOHA Hospital, Takoradi after celebrated mass the previous day at the Star of the Sea Cathedral in Takoradi.

Abuah Quansah, a canon lawyer, and a native of Mpohor in the Western Region, was also a former rector of St. Paul’s Major Seminary, Sowoutuom.

Until his demise, Monsignor Dr Francis Abuah Quansah was the Apostolic Administrator’s Delegate of the Catholic Diocese of Sekondi-Takoradi.

A family source who confirmed his death said the church will announce further details of his death and burial arrangements.