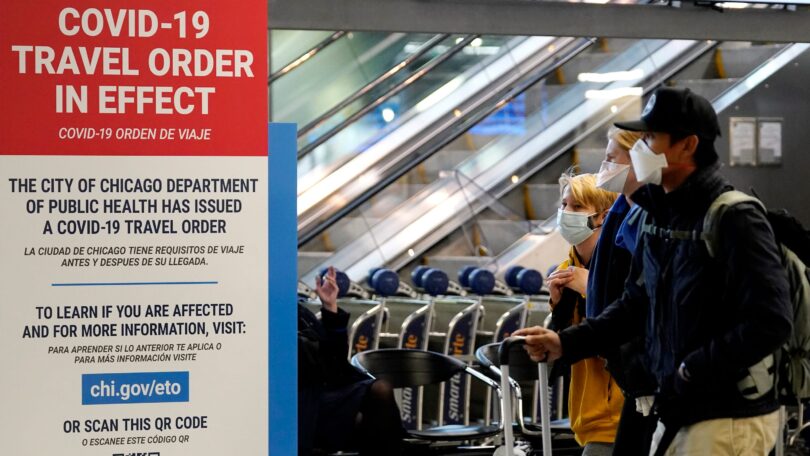 Elaine Swann, lifestyle expert and founder of The Swann School of Protocol, explains how to turn down a social gathering politely during the pandemic.

A second vaccine maker will file for emergency use authorization from the U.S. Food and Drug Administration after more data from its clinical trial showed its vaccine candidate to be above 94% effective.

Moderna said it expects the FDA’s advisory committee to discuss its vaccine on Dec. 17, a week after it meets to discuss Pfizer’s.

The good news, however, comes as a stay-at-home order in Los Angeles County, the nation’s most populous, begins Monday and runs through Dec. 20.

Ten million residents are being asked to stay home “as much as possible” and prohibited from gathering publicly and privately with people outside of their households, except for religious services and protests.

The order goes into effect a day after California reported more than 7,400 new COVID-19 hospitalizations, the highest number during the pandemic.

Here’s what to know Monday:

The 49ers will host the Buffalo Bills on Dec. 7 and the Washington Football Team on Dec. 13, the team announced in a release.

“The Cardinals organization, State Farm Stadium and League officials have been supportive and accommodating as we work through the many logistical issues involved in relocating NFL games,” the 49ers said.

The team also has one remaining home game: a Week 17 date with the Seattle Seahawks on Jan. 3. It is unclear whether the 49ers will be able to host that game in Santa Clara.

A Centers for Disease Control and Prevention panel is scheduled to meet Tuesday to vote on how to allocate the first supplies of a COVID-19 vaccine.

The meeting on who gets the first doses comes as at least two vaccine makers have filed for emergency use authorization with the U.S. Food and Drug Administration.

The chairman of the CDC’s Advisory Committee for Immunization Practices, Dr. Jose Romero, told CNN the group was meeting to ready their recommendation on who gets the first shots before the FDA authorizes any vaccine candidate.

When a vaccine is available, it will be in short supply and rationed by the federal government. Front-line health care workers are expected to be among the first people to get vaccinated.

Rhode Island hospitals are at capacity

An emergency alert sent to phones across the state Monday morning read, “Hospitals at capacity due to COVID. Help the frontline by staying home as much as possible for the next two weeks.”

The state built two field hospitals to meet the demand for beds; one is in Cranston and the other is at the Rhode Island Convention Center in Providence.

The U.K.’s National Health Service is expected to OK the use of the Pfizer/BioNTech COVID-19 vaccine, The Guardian and Telegraph reported.

The Telegraph, citing unnamed sources, reported Monday that the vaccine could get regulatory approval this week and that hospitals have “been told to be ready to deploy a vaccine from as early as Wednesday.” The Guardian, also citing unnamed hospital sources, reported Friday that authorization was expected “within days,” and hospitals could receive their first doses as soon as Dec. 7.

In the U.S., an FDA advisory committee is expected to meet in early December to discuss Pfizer’s and its German collaborator BioNTech’s vaccine, and authorization is expected to a few days after.

Stan Novak, of Valencia, California, has been hunkering down this year, spending little beyond the bare essentials. But after a flurry of positive news reports this month about COVID-19 vaccines, Novak ventured out to department stores on a recent weekend and splurged on new sneakers, sports and T-shirts, and a tablet.

“I felt better about everything,” Novak, 75, said. Prospects around the vaccine candidates already seem to be providing at least a modest lift to consumer and business confidence and spending – and the broader economy – amid an otherwise bleak winter outlook.

“I think people are finally seeing the light at the end of the tunnel and they’re starting to let loose the reins of consumption,” says Jacob Oubina, senior U.S. economist at RBC Capital Markets.

No surprise: ‘Pandemic’ is Merriam-Webster’s word of the year

In what a Merriam-Webster editor admitted “probably isn’t a big shock,” “pandemic” was dubbed the word of the year in 2020, the popular dictionary company announced Monday.

“Often the big news story has a technical word that’s associated with it and in this case, the word pandemic is not just technical but has become general. It’s probably the word by which we’ll refer to this period in the future,” said Peter Sokolowski, editor at large for Merriam-Webster.

Searches for “pandemic” started to tick up in January and spiked in February, Merriam-Webster said. On March 11, the World Health Organization declared the novel coronavirus outbreak a global pandemic, causing the a 115,806% spike in lookups compared to 2019.

Police in New York City busted an illegal party over the weekend where around 400 people gathered in violation of city and state limits on gatherings amid the coronavirus outbreak.

The city has busted several other illegal parties violating mass gathering restrictions since the limits were put in place.

Moderna to apply for FDA authorization for COVID-19 vaccine

Biotech company Moderna will apply Monday for an emergency use authorization from the U.S. Food and Drug Administration after receiving more good news about the safety and effectiveness of its candidate COVID-19 vaccine.

It will be the second vaccine maker to request authorization from the federal government, following similarly positive results for Pfizer and its German collaborator BioNTech’s candidate vaccine.

Moderna’s latest findings, according to a company press release, showed that of 196 people in the clinical trial who caught COVID-19, 185 of them had received the placebo, while only 11 received the active vaccine. That works out to an effectiveness rate above 94%.

Of the 30 participants who suffered severe disease, all were in the placebo group, suggesting that the vaccine prevents both mild and serious disease. One placebo recipient died.

Since England entered its second lockdown more than three weeks ago, the infection rate has dropped down to around 1% after it had been around 1.3% before the lockdown, the study says.

Prime Minister Boris Johnson instituted the new lockdown order earlier this month, closing all nonessential businesses, bars and restaurants. The restrictions are set to end at the beginning of December and be replaced with a regional tiered system of restrictions.

Hybrid learning was shut down Nov. 19 after the citywide rate of coronavirus tests exceeded a 3% benchmark agreed to by the mayor and the teachers’ union.

The mayor said the benchmark will be scrapped in favor of a focus on testing at schools. The city will also move toward providing in-person classes five days per week and phase out the hybrid model for the 1.1 million-student district, the mayor said.

As of Sunday, California has recorded nearly 1.2 million confirmed coronavirus cases. The state reported around 15,600 new cases on Saturday. There have been 19,121 virus-related deaths in California during the pandemic.

The state reported 7,415 coronavirus hospitalizations on Sunday, citing the most recently available data from the previous day. More than 1,700 of those patients are in intensive care units. The new total hospitalizations breaks the state’s previous record of 7,170 in July.

An oncology nurse in Oregon has been placed on administrative leave after posting a video on social media showing disregard for COVID-19 restrictions.

In the video, uploaded Friday to TikTok, the nurse, identified by Salem Health hospital officials as Ashley Grames, says she doesn’t wear a mask in public outside of work, continues to travel and allows her children to have playdates.

An investigation is pending while Grames is on leave. Salem Health officials addressed the video on Facebook, calling it a “cavalier disregard for the seriousness of the pandemic.”

Nevada health officials say the number of confirmed coronavirus cases statewide has surpassed 150,000. The state’s coronavirus dashboard on Sunday reported 150,527 cases of COVID-19 since the outset of the pandemic and more than 2,100 related deaths.

Concerned by the virus’ continued spread, Gov. Steve Sisolak on Nov. 22 announced the state’s most expansive mask mandate to date and reduced the capacity at casinos, restaurants, bars and many other businesses from 50% to 25%.

The number of infections is thought to be far higher than reported because many people have not been tested, and studies suggest people can be infected with the virus without feeling sick.

Dr. Anthony Fauci issued another warning to the nation Sunday to wear masks, social distance and dismiss the urge to gather for the holidays – or face a winter of staggering infections, hospitalizations and even deaths.

He blamed holiday travel and families gathering in advance of Thanksgiving for the latest round of dismal statistics.

“What we expect unfortunately as we go for the next couple of weeks into December, that we might see a surge superimposed upon that surge we are already in,” Fauci said on “Meet the Press.” “I don’t want to frighten people, except to say it is not too late at all for us to do something about this.”