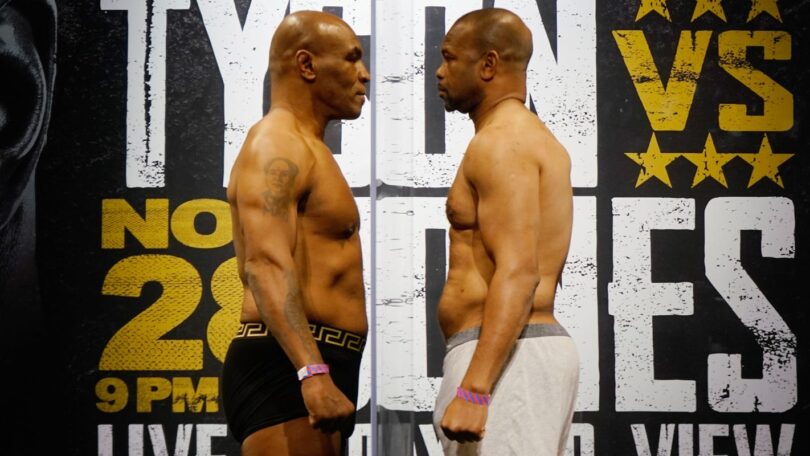 LOS ANGELES — Mike Tyson did not score a knockout against Roy Jones Jr. on Saturday night, but he looked formidable in his return to the boxing ring at the age of 54.

Tyson looked aggressive from the outset and stalked Jones, 51, through most of their eight-round exhibition fight at Staples Center.

But Jones remained on his feet when the final bell rang — and three former WBC champions scored the bout a draw. USA TODAY Sports scored the fight 78-74 for Tyson.

“I’m glad I got this under my belt,” said Tyson, who also said he was good with the draw “because I entertained the crowd.”

Tyson delivers hard left to body. Jones could be in trouble. Fighters separated. Tyson connects with left to Jones’ head. Tyson looks fit and powerful. Fighters in clinch — the only place Jones looks safe. Tyson misses with menacing right. In another clinch. Jones connects with a left. Tyson unloads with two more rights. And more punches after the bell. Cups Jones head as if in apology. Tyson wins round 10-9 (Tyson 20, Jones 18).

Tyson attacking again. With a solid left. Jones dancing, but still managing to fling some punches. None landing. Tyson goes to the body. Trying to get something out of yet another clinch. Tyson connects with two rights to the body. Jones lands a solid left. But Tyson keeps coming. Tyson wins round 10-9 (Tyson 39, Jones 37).

Jones throws a flurry. Nothing. Tyson connects. In another clinch. Another nice exchange. Tyson drilling Jones’ body as they remain in a clinch. Big left by Tyson! Jones looks to be in trouble. Hanging on. Barely. Survives a last-second flurry. Tyson wins round 10-9 (Tyson 49, Jones 46).

Tyson remains the aggressor. But Jones throws a flurry of punches. Tyson looks angry. Comes back with hard punches, and Jones responds with his own. Jones looking game. Working left jab with some confidence. But Tyson still powering forward. Landing some body punches. Solid round for Jones. Jones wins round 10-9 (Tyson 68, Jones 65).

Tyson fires a right and they’re back in a clinch. Jones isn’t interested in letting things fly. Jones dancing. Showboating. Hilarious. Tyson look for the KO, and Jones looking to survive. No big punches left to come. Tyson wins round 10-9 (Tyson 78, Jones 74).