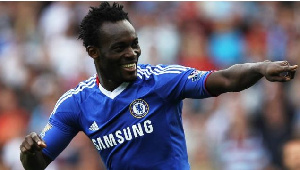 Ghana’s Michael Essien has been voted as part of Chelsea’s team of the decade alongside some Chelsea greats such as John Terry and current coach Frank Lampard.

The polls was voted for mainly by the club’s supporters and the former midfielder who spent the most part of his career at the London club made the cut.

Michael Essien was paired in the middle alongside midfield dynamo Ngolo Kante, and current coach and former teammate Frank Lampard in a 4-3-3 formation.

Moving into the middle of the park, the man nicknamed ‘the Train’ by Jose Mourinho may have been derailed occasionally by injuries near the start of the decade but he made enough of an impression to win the choice of our fans for one of the three midfield berths despite some close competition.

Essien joined Chelsea in 2005 from French side Olympique Lyon for a then African record transfer fee of £24.4 million.

Its an honour to have been selected as part of the @ChelseaFC team of the decade. Thank you to all the fans who voted for me. Delighted to be part of @ChelseaFc Family for life?????? pic.twitter.com/EZxD52A8ug

He spent nine years at Chelsea where he netted seventeen goals in 168 appearances and won several trophies including the Champions League in 2012.

Essien is currently a player-coach at Azerbaijan Premier League side Sabail FK.