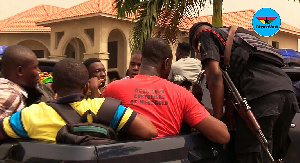 The 90 Menzgold customers who were arrested last week, for massing up at the residence of Chief Executive Officer of Menzgold, Nana Appiah Mensah, are expected to be put before the Madina District Court in Accra tomorrow, Tuesday.

The customers were charged with unlawful entry and offensive conduct after they forcibly entered the Trasacco Estates at East Legon in an attempt to confront Nana Appiah Mensah over their locked up investments.

Despite cooperating with the investigative process so far, the customers say the date provided for court was on short notice.

In an interview with Citi News, a spokesperson for the customers, Fredrick Forson who stood as a surety pleaded for postponement of the court date.

“For now, the time is limited for us to move people from Bogoso, Tarkwa, Kumasi and Mampong to come and assemble at the court early in the morning. We were looking at how to engage the court to plead for more time so that we can arraign them at a very appropriate time.”

The customers were at the residence of NAM1 to demand their locked-up investments.

Menzgold has since its collapse in 2018, following a suspension order from the Securities and Exchange Commission (SEC), been struggling to refund monies invested by the customers.

After agitations from customers spanning over a year, Menzgold was to begin paying customers their locked up funds from December 27, 2019.

Officials of the company had said about 200 of the customers have been paid their monies.

But customers remain sceptical with a spokesperson for the Coalition of Aggrieved Customers of Menzgold, Francis Owusu, saying the reason they stormed the residence of the Menzgold CEO was to demand from him a list of the people he claimed he had so far paid.

“For almost one week now, Nana Appiah Mensah and his Menzgold have been telling lies to the general public that they have paid 200 of their customers which is false. So, as customers in the various regions, we decided that we will pay Nana Appiah Mensah a visit and find out from him who those people that he keeps telling the general public that he has been paying them are.”