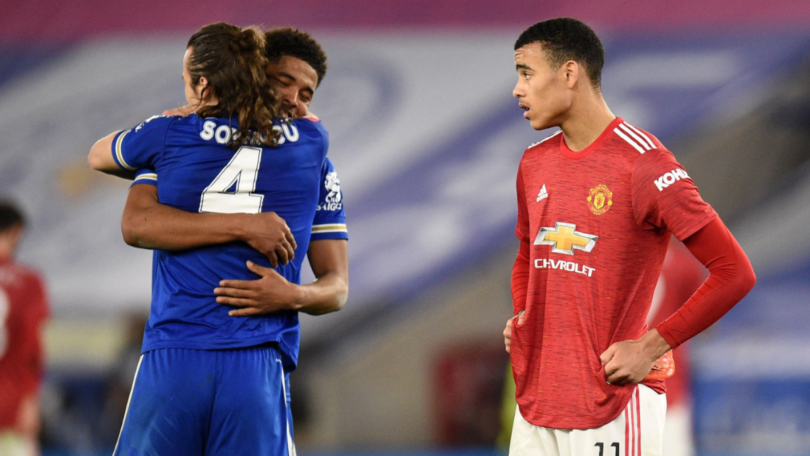 Manchester City were crowned Premier League champions for the third time in four seasons as Leicester City secured their first Old Trafford victory over Manchester United since 1998 to take a major step towards a place in next season’s Champions League.

Defeat for United means they are 10 points behind City with only three games remaining.

Caglar Soyuncu’s far-post header was enough to bring a smile to Brendan Rodgers’ face and that of Pep Guardiola, whose dominance of the English game is increasing.

A United side showing 10 changes to the team that won at Aston Villa two days previously battled hard, with Mason Greenwood levelling after fellow 19-year-old Luke Thomas had put the visitors in front with a fantastic far-post volley into the top corner.

Ironically, Leicester’s winner came from a corner that was delayed by the introduction of two United substitutes by manager Ole Gunnar Solskjaer.

One of them, Marcus Rashford, was initially marking Soyuncu at the corner but lost the Turkey international in the build-up and Nemanja Matic was unable to repel the goal threat.

The result brought to an end United’s 14-match unbeaten run in the league, since the home defeat by Sheffield United on 27 January.

Rodgers’ side now only require four points from their final two games to secure a top-four finish, although before that quest resumes, they will attempt to win the FA Cup for the first time in the club’s history against Chelsea at Wembley on Saturday.

Leicester celebrate rare Old Trafford success
Solskjaer had already said he would have no option other than to make mass changes given a fixture list that consigned his team to play three times in five days.

This central fixture was always likely to be the one in which United started with the fewest regular members of their first-choice line-up.

Yet Leicester had reason to be cautious about their good fortune.

Their record against United is awful, with just two wins in 29 previous Premier League meetings and only one success in their last 22 top-flight visits to Old Trafford.

In addition, a run of two wins in six league games brought worrying parallels of the post-lockdown run of two wins from nine matches that saw them miss out on qualification for this season’s Champions League thanks to the only two weeks they have spent outside the top four since September 2019.

Thomas’ opener was only the third time Leicester had taken the lead in a Premier League game at Old Trafford but the local-born Leicester fan produced a memorable finish to mark it.

The teenager had the maturity to wait for Youri Tielemans’ cross to drop before applying the devastating end product, effectively passing the ball over David de Gea and into the far corner of the net with a brilliant side-footed volley.

Greenwood responded with an excellent goal of his own as he collected Amad’s pass before driving into the box and beating Kasper Schmeichel with a finish that showed why many now think he should be in Gareth Southgate’s squad for Euro 2020.

Southgate will be relieved United skipper Harry Maguire only sustained ankle ligament damage at Villa. But the centre-half was sat in the stand with a protective boot on, so his presence was missed at the corner that proved decisive, both for Leicester and Manchester City.

No protests but leaky Old Trafford roof
The mass protests that led to the late postponement of a scheduled match against Liverpool on 2 May have triggered the offer of peace talks from United co-chairman Joel Glazer.

This may be unprecedented but after 16 years of zero engagement, it is no wonder many fans are sceptical.

They view the Glazer family’s tenure of their club almost exclusively in negative terms.

In order to prevent a repeat of those previous scenes, barricades were put in place on the Old Trafford forecourt and huge numbers of police and security staff were guarding them.

There were no protestors as it turned out but the process will be repeated in two days’ time, when Liverpool visit again, although what happens next week, when Old Trafford will have a maximum of 10,000 fans back inside for the final home game of the season against Fulham, will be interesting.

As if to underline it is not just their team that gives United fans cause for concern, a leak in the roof which meant journalists sitting on a certain row got wet on an awful night weather wise, was evidence of the need for investment in the infrastructure as well.

What the managers said
Manchester United boss Ole Gunnar Solskjaer, speaking to BBC Sport: “We’ve had loads of games recently and had to make changes and that went against us a little bit. Amad [Diallo] was very good. [Anthony] Elanga gave us something different and I thought Mason [Greenwood] was absolutely fantastic.

“I know what he can do finishing, it’s all the other bits, his robustness, resilience and the way he led the line tonight. He thought he needed to take responsibility and he did that the whole night but I had to take him off because he has played three games in five days.

“We did a bit in training yesterday and this morning so we did not have a lot of time to prepare and you could probably see that early on.”

Leicester manager Brendan Rodgers, speaking to BBC Sport: “It feels really good. I am really happy with the win and the performance. We started well and scored a really good goal.

“The move was perfect from our perspective. It was an amazing finish from Luke [Thomas] but we invited pressure by passing too slowly. If you pass the ball slowly top players press the game and they have some top players here.

“I am so happy for the players because we were disappointed after the last performance.”

The best stats
Leicester won an away top-flight game against Man Utd for the first time since January 1998 (1-0), with this just their second such win in their last 23 visits to Old Trafford (W2 D5 L16).

Since the start of last season, Mason Greenwood has scored more goals in all competitions than any other teenager in Europe’s top five leagues (29).

Amad Diallo’s assist for Mason Greenwood was the first time a teenager assisted another teenager for a Premier League goal since David Wheater set up Adam Johnson for Middlesbrough in May 2006.

Trafford and the first since Matty Longstaff in December 2019. Thomas became the youngest player to score his first Premier League goal in a match against Manchester United at Old Trafford.

Manchester United are next in action against Liverpool at Old Trafford on Thursday, 13 May (20:15 BST).

Leicester feature in Saturday’s FA Cup final with Chelsea at Wembley (17:15 BST). The Foxes’ next Premier League game is also against Chelsea, at Stamford Bridge on Tuesday, 18 May (20:15 BST).