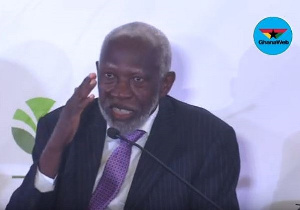 There have been several instances where politicians have been criticized for exchanging insults with party-opponents on radio and television. This culture has been largely condemned by the general public who have been calling for sanity on the Ghanaian airwaves.

Former Director-General and Rector of the Ghana Institute of Management and Public Administration (GIMPA), Professor Stephen Adei in 2017 stated that the change in leadership in the country that saw former president Mahama being voted out of office brought some sanity on the airwaves. His assumption was that some government officials in the Mahama era exhibited arrogance and impunity adding that their exist made the “atmosphere better”.

Read the full story originally published on January 3, 2017, on Ghanaweb

A former Rector of the Ghana Institute of Management and Public Administration (GIMPA) says the change in leadership has brought sanity on the airwaves.

Professor Stephen Adei observed with amazement that the last two public utterances of President John Dramani Mahama after his defeat in the December 7 polls have been “very presidential.”

“Even before we see the installation of a new president, the atmosphere has become better,” he told Joy FM’s Super Morning Show host Nhyira Addo Tuesday.

The educationist said when new leaders take office, they do not need to continue with attitudes exhibited by the previous leaders.

He said they are responsible for giving a new vision to the entity by modeling a new set of culture to change the current one.

Names of potential ministers have been put out with four days to the inauguration of President-elect, Nana Addo Dankwa Akufo-Addo.

The President-elect has announced Professor Frimpong Boateng as his Environment and Science to be. He has also done the same for Alan Kyerematen as the incoming Trade Minister.

But Professor Adei has cautioned the incoming government to be wary of the Ghanaian culture where subordinates initially kowtow to demands of the new leader only to change later.

He stressed that his experience has shown that once a leader has integrity, competence, and care for the people they would know the person is all business.

“They [appointees] know that you are prepared to take the hard decisions. Even the worst Ghanaians start conforming; they would try to undermine you…especially if you are a minister, they would malign you for you to be moved,” he said.

Prof Adei says he is looking forward to a President who would be a person of integrity, adding that leadership is a cause and everything else is the effect.

He said Ghana has had a bad history with corruption, arrogance, and impunity being exhibited by government officials. Ghanaians are used to such behaviors, he said, stressing a lot of things are changing.