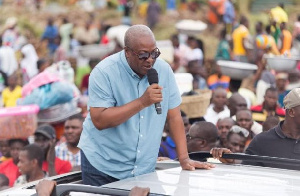 The flagbearer of the National Democratic Congress (NDC),John Dramani Mahama has suspended his speak out tour slated for Friday, 20th March 2020 in the Savannah region until further notice.

The move is to prevent the spread of the coronavirus in the country.

Ghana has recorded six cases of the disease.

Mr Mahama’s decision came ahead of government’s ban on all social gatherings including political rallies for the next four weeks.

The speak out tour is part of a campaign strategy that gives the former president an opportunity to interact and listen directly to the concerns of the people, especially at the grassroots.

Coronaviruses (CoV) are a large family of viruses that cause illness ranging from the common cold to more severe diseases such as Middle East Respiratory Syndrome (MERS-CoV) and Severe Acute Respiratory Syndrome (SARS-CoV). A novel coronavirus (nCoV) is a new strain that has not been previously identified in humans.

Standard recommendations to prevent infection spread include regular hand washing, covering mouth and nose when coughing and sneezing, thoroughly cooking meat and eggs. Avoid close contact with anyone showing symptoms of respiratory illness such as coughing and sneezing.