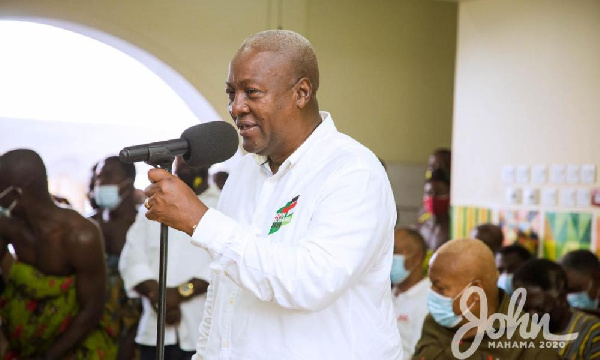 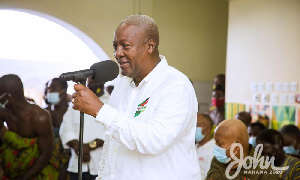 Former President John Dramani Mahama has condemned the beating of WO1 Mashud Salia of the Ghana Armed Forces by operatives of the National security.

Speaking at Damongo during his campaign tour of the Savannah Region at the weekend, former President John Dramani Mahama said; “A Soldier Warrant Officer, was beaten up by National Security operatives” and further asked, “when have you ever heard this in the history of the 4th Republic”.

The flagbearer of the National Democratic Congress (NDC) said; “National Security is a Coordinating agency..I’ve been President before..it is not an operational agency.

According to Mr Mahama; “Nana Akufo-Addo has turned everything down and so a National Security officer can threaten a police officer and we saw the video in Kumasi where a police officer in uniform was sitting down somebody in civilian clothes was holding a pistol and threatening him.. and the sad thing is that there were soldiers and other police officers there and they were begging the person to calm down”.

Mr Mahama added; “under John Mahama the slaps he would have received he himself will never ever threaten a Police officer again”.

He further said; “And because of that moral in the Service is low and because of that is why armed Robbers are running all over the place. We have a curfew and after 9:00pm hardly will you see any car attempting to go on the Sawla to Fufulso road because one is afraid he will run into armed Robbers. In some come parts of the country Armed robbery take place almost every market day and instead of the you to give the weapons to the police and soldiers to go and fight the armed robbers they have given them to delta forces, invincible forces and certain crocodiles and all those bull dogs and things”.

Mr Mahama said; “a well trained Police officer goes to the police depot for six months of rigorous training before he comes out but under NPP they are passing some recruits out after recieving 4 weeks of training only so that they can come into the police Service, bring them to the polling stations and put them in uniforms in order that they can intimidate voters, and frightened people not to vote for the NDC”.

Amidst changing hy the massive crowd, the NDC flagbearer said; “It will not help them and whatever they do, they can go up and they can come down insha Allah NDC will win this election”.

On Wednesday, November 25, 2020, the Chronicle Newspaper reported the assault of one WOI Mashud Salia with the Ghana Armed Forces by gun-wielding men said to be from the National Security.

According to the Newspaper, the uniformed officer was pulled out of his saloon car, subjected to physical assaults and handcuffed in the full glare of the public for failing to give way to a convoy of four vehicles at the Ashaiman Tulaku section of the Tema- Akosombo Highway.

The report said the public watched in disbelief as the Physical Training Instructor (PTI) at the First Battalion of Infantry was being humiliated by the alleged National Security Operatives. The Paper further added that the incident has brewed tension within the Military High Command and that a crunch meeting has been held between the National Security and top brass of the Military Hierarchy. The Military has also released a statement calling for calm and assured that the matter is being investigated and anyone found culpable will be dealt with in accordance with the law.