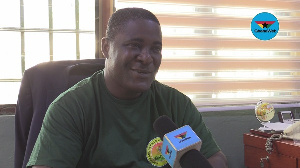 There’s been a massive rush at the Accra premises of the Driver and Vehicle License Authority (DVLA) for the registration of 2020 number plates after the New Year.

The observation was made after a visit by GhanaWeb to the premises on January 2 to check the processes for the newly introduced online Vehicle Registration System (VHS) and digitized DP licence plate registration.

The Driver and Vehicle License Authority however says it’s expecting to register about 300 vehicles by the close of January 2 since the introduction of the online Vehicle Registration System (VRS) which was launched on January, 1 2020.

According to Mr. Attah Kumah Mensah, Regional Licensing Officer, DVLA-Accra, the VRS process which is expected to eliminate loopholes and prevent potential duplications has so far been remarkable despite a few challenges which have since been resolved.

“Today we’re targeting about 300 vehicles by the close work and the process for the VRS is going on very well so far and we’ve done a lot public sensitization with adverts, signages around and the patronage so far has also been remarkable and I entreat all car owners who have not registered their vehicles to go through the VRS”

Mr. Kumah Mensah speaking in an interview with GhanaWeb on January 2 however revealed that there’s been a challenge with registering commercial vehicles under the VRS but expects the issue to soon be resolved.

“We currently have a challenge with registering commercial vehicles when it comes to VRS but once that challenge is resolved it will take over the manual process completely but I can confirm that the process this time around is smoother than previous years,” he explained.

Explaining the notion of the Authority introducing new prefixes for the registration of vehicles, Mr. Kumah Mensah said the move was to decongest the Accra office to other vehicle registration and licensing centers across the country.

The new license plate prefixes the Authority has introduced are; ‘AK’ for Bekwai-Ashanti, ‘AP’ for Mampong-Ashanti, ‘AC’ for Obuasi, and ‘BT’ for Techiman. Others are ‘BW’ for Wenchi, ‘EN’ for Nkawkaw, ‘ES’ for Somanya, ‘VD’ for Denu and ‘WT’ for Tarkwa.

Checks by GhanaWeb at the Accra premises of the DVLA indicated the frustration of some persons by the process of the online vehicle registration.

A motorist, Ibrahim Mahama speaking to GhanaWeb said the process was rather moving at a slow pace and called for the authorities to put in place enough custom officers to speed up the process.

“Right now, it’s in God’s hands and I just can’t tell when I will be able to complete the registration process today or tomorrow”

Another, Bossman Foster said; “Since morning the authorities here have not come out to tell us anything about the slow pace in registration. I don’t know how many cars they have registered today but they claim they are working inside so we don’t know where documents are coming from because you can see somebody holding between 5-10 documents, is that person having 10 cars to come and licence?” he quizzed.