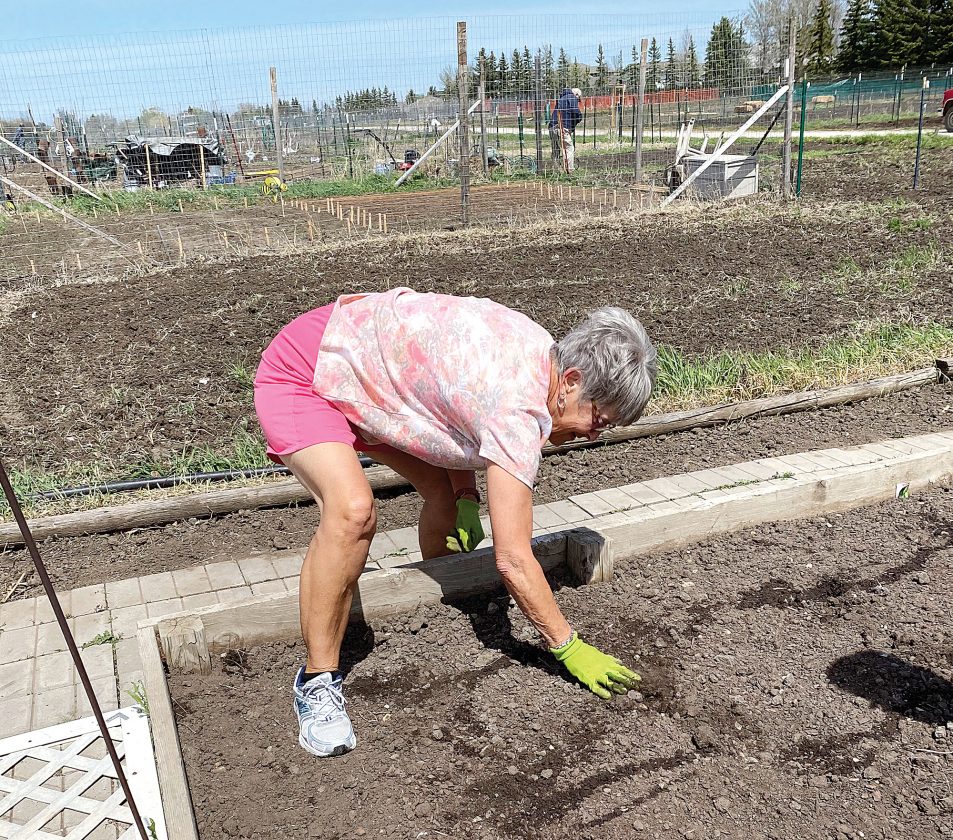 Beaty Schell covers the cucumber seeds her husband places in the ground at Rainbow Gardens.

Gardeners have grown fruits and vegetables at Minot’s Rainbow Gardens for decades. During the COVID-19 pandemic, gardeners of many ages are getting outside to get some fresh air and exercise.

Locals Beaty and Leo Schell have rented the same garden plot for 16 years. Their plot started out as just a section of dirt, but 2 years ago, the members of the Rainbow Garden Association, volunteers from the Air Force and a youth group from a local church put down pavers and built garden boxes to make it handicap accessible and easier for the elderly to tend to their gardens. Just like every other year, the Schell’s are planting radishes, green beans, cucumbers, potatoes and tomatoes.

On May 15, the couple was working on getting the weeds out of their potato patch and started planting tomatoes. On May 18, Leo Schell put cucumber seeds in one boxed section. After he finished, Beaty Schell went around and covered the holes with dirt, making sure they were secure in their place. “We were afraid that the cucumber seeds were going to blow away!” she said.

The Schell’s have been retired for 20 years, going down to Arizona in the winter. Going to Rainbow Gardens gives them another activity to do in the sun besides going on bicycle rides and walks. In the face of the pandemic, Beaty Schell said, “The coronavirus hasn’t affected anything.”

Gerry Undlin has been occupying at least two plots for 20 years since he moved to Minot from Lansford, having up to six plots at one point. He got into gardening to help his granddaughter raise money to go to medical school. Instead, she graduated from the University of North Dakota as a registered nurse.

This year, Undlin has three plots, at least one of them measuring 30 feet by 50 feet. As usual, he’s planning on growing tomatoes, potatoes, cabbage, green beans, onions, beets, cucumbers and muskmelons. Having more than one or two plots at a time is physically taxing and can take a long time to work on. His grandkids know that and occasionally go to help him.

He sells his fruits and vegetables east of the Cenex on 20th Avenue SE. His grandson meets up with him and together they sell the corn the young farmer harvested.

Tim Miller also has a full-size plot, just south of Undlin’s. Miller helped his mother tend the garden for four years before she passed away last year. The plot is now in his name, but sometimes his wife joins him to give him an extra pair of hands.

As of May 15, Miller was planning to plant squash, peas, beans, onions, beets, radishes, lettuce, cucumbers, cabbage, tomatoes, bell peppers, jalapenos and kohlrabi, which is a German turnip. To avoid the possibility of his sensitive plants freezing, he decided to wait to plant his tomatoes. “Some plants take the cold better than others,” he explained.

Community gardens, once called Victory Gardens, have been around since World War I. A community garden was located near Perkett Elementary School for about 20 years, Mike Ruelle said. The gardens have been by the South Hill baseball complex for around 30 years, also next to Rosehill Cemetery. “It moved to its current location because that property by Perkett was going to be used for something else,” Ruelle said. “The city bought the area by the cemetery. It’s a good spot and allows the city to not have to maintain it.”

Ruelle has two full-size plots, as well, planning on growing most of the same vegetables as the others, including carrots and corn. He has had plots there since 2007 when they moved back to Minot the year before.

“It’s a good way to get out and get some fresh air and sunshine,” he added. “You can work off the energy and have some quiet time to yourself. It’s good for you.” He laughed when he said, “There’s nothing in the world like the first tomato!”

For those who do not want a full 30-foot by 50-foot plot, there are half-size plots, measuring 15 feet by 25 feet. Deb Sisco, the treasurer for the Rainbow Gardens, said there are still some plots that have not been rented out yet.

Gardening is an excellent way to stay active and soak up some sun during the COVID-19 pandemic. The plots are large enough that social distancing would be easy to practice while others are working the soil, watering and planting.


Today’s breaking news and more in your inbox