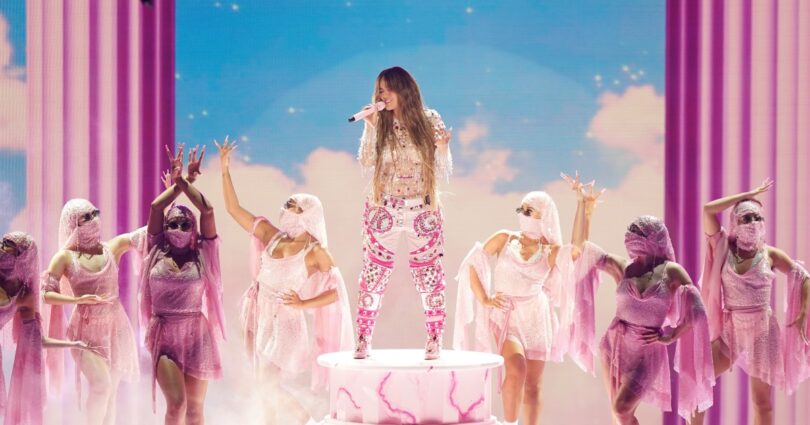 For the second year in a row, Spanish electro-flamenco phenom Rosalía took home the most awards of the night. Her three awards tied the the award count of Colombian superstar Carlos Vives and Mexican singer-songwriter Natalia Lafourcade, the latter of whom scored the coveted album of the year award — the second solo female act to do so since Rosalía’s 2019 victory ended a 13-year drought.

Because of the COVID-19 pandemic, not every winner was able to accept the golden gramophone in person, backup dancers were often outfitted in matching face masks, and the live audience and traditional red carpet were struck from the festivities.

From Bad Bunny’s joyride through San Juan to Karol G’s “Tusa” spectacular, here’s a sampling of the many must-see moments from the Latin Grammys telecast.

Aparicio went from queen of the Oscars to queen of the Latin Grammys as she made her hosting debut alongside Manuelle and Contreras.

The beloved “Roma” breakout, who last year made history as the first Mexican Indigenous performer to be nominated for the Academy Award for lead actress, looked radiant while stepping out in gorgeous ensembles — including a vibrant, billowing fuchsia gown that stole the mini, photo op-only red carpet.

“Many thanks to the @latingrammys for such a wonderful opportunity,” Aparicio wrote on Instagram after the show. “I had an amazing time, and I hope you enjoyed it at home, too.”

Puerto Rican reggaeton sensation Bad Bunny took his perform-from-home assignment to another level, kicking off his “Bichiyal”/”Si Veo a Tu Mamá” medley by gliding through the streets of San Juan in a shiny white sports car, flanked by a entourage of motorcyclists.

Bad Bunny took home the Latin Grammy for best reggaeton performance for “Yo Perreo Sola” after racking up nine nominations, the second most of any artist this year.

Colombian reggaeton-pop star Karol G electrified the Miami stage with a shimmering, all-pink-everything homage to her hit “Tusa” music video featuring rapper Nicki Minaj — who was there in spirit thanks to a mid-performance shout-out from her song partner.

Much to her loyal fans’ dismay, the “Bichota” artist walked away from the ceremony empty-handed, despite earning a nod for song of the year with “Tusa” and doubling up on nominations in the record of the year category.

In Balvin’s case, it was a literal bleeding heart that he wore next to his sleeve while delivering an emotional performance of his single “Rojo,” backed by a gospel choir and a montage of scenes from Black Lives Matter demonstrations.

Despite leading the Latin Grammy nominations this year with 13 nods, Balvin ended up winning only the trophy for urban album.

While accepting his award, the “Colores” artist — who famously boycotted the 2019 Latin Grammys after the academy snubbed reggaeton and Latin trap artists in major categories — said, “I hope others in the world can see the colors in this moment.”

Upon welcoming Los Tigres del Norte to the stage, Contreras advocated for “the families unjustly separated” and the “Dreamers who remain hopeful.” The norteño collective’s poignant performance of its 1988 tune “Tres Veces Mojado” doubled as a tribute to migrants from Central America.

Legends get their musical flowers