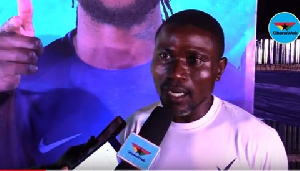 The ex-Phobian attacking midfielder is happy to see Gyan return to the local league.

Gyan joined Cities on a one-year deal last week, marking his return to the Ghana Premier League for the first time since leaving for Italian SerieA side Udinese in 2003.

Speaking after a friendly match between Professional Footballers Association of Ghana (PFAG) Accra and PFAG Western, dubbed ‘Battle of Stars’ on Sunday, at the Nduom Sports Complex in Elmina, he stated that Gyan is going to have a positive impact on the local league.

“Asamoah Gyan coming down to play in the Ghana Premier League is very good. for me, I really appreciate what he’s done. He going to bring a lot of positive vibe around it,” he said.

Kingston returned to the premier league in 2007 signing one and a half-year contract for Hearts of Oak.

“Its a very good thing, coming back to play in Ghana to end your career. I think its going to encourage the up and coming players alongside him. watching him play and then playing with him, I think it’s a plus to them, it’s going to help them a lot,” he was hopeful.

Gyan was without a club for nine months. His last stint – a short-term deal with Indian Super League side NorthEast United – ended in January.

In his previous and only GPL spell, Gyan netted 10 goals for Liberty Professionals in 2003.