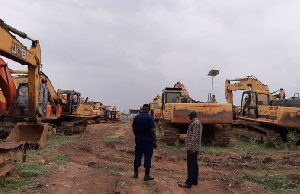 Kwaku Asomah-Cheremeh at where the excavators are

The Minister for Lands and Natural Resources, Kwaku Asomah-Cheremeh visited the Adenta site where some of the seized excavators from the anti-galamsey fight were logged.

The Minister and his team made up of the two Deputy Ministers Benito Owusu Bio, Naana Eyiah and some Technical Directors from the Ministry took inventory of the seized equipment.

Asomah Cheremeh disclosed during an on the spot assessment that Cabinet had directed the Ministry of Lands and Natural Resources to take charge and custody of all mining equipment and related issues which was previously handled by the IMCIM and its chair, Prof. Kwabena Frimpong Boateng.

The directive by the Cabinet falls in line with the mining law and the mandate of the Ministry.

In all, one hundred and twenty-two excavators of various sizes were identified and numbered.

Thehawknewspaper.com on February 4, 2020, published that the seized excavators were parked on a plot of land belonging to Ghana Civil Aviation Authority at Adenta.

These excavators had been declared missing by Professor Kwabena Frimpong Boateng.

We reported that the earthmoving equipment was firstly parked and abandoned at Abelemkpe on a plot of land owned by Christian Swaniker but was later evacuated for failure to pay rent and breach of an agreement to the Landlord.

The activities of miners in some parts of the country have led to the destruction of several water bodies including the Pra, Densu and Offin rivers.

This led to a temporal ban on the activities of small-scale miners in March 2017 as part of efforts to sanitize the sector and cleanse the water bodies which serves millions of households in Ghana.

The two-year ban was, however, lifted on December 17, 2018. The minister for environment, Prof. Frimpong-Boateng during a ceremony to announce the unveiling of the ban said only registered and validated small scale miners would be allowed to mine in their designated concessions.

But this has been called into question again after some people were spotted busily engaging in illegal mining, popularly known as galamsey, during an unannounced visit by the Lands and Natural Resources Minister, Kweku Asomah Cheremeh.

Prof. Frimpong-Boateng attributed the ongoing activities of illegal miners to “indiscipline” on the part of Ghanaians.

“How can young people from any country descend on their town, go to the bush with metal detectors and detect superficial nuggets and start digging and nobody says anything in that town.

“And the police too will be there without doing anything and they expect the inter-ministerial committee and operation vanguard to move from their FOBs to these areas to do that. We must know we have a precious thing and we need to protect what is precious to us” he charged.