Home » LACMA invites you to a most surreal work holiday party 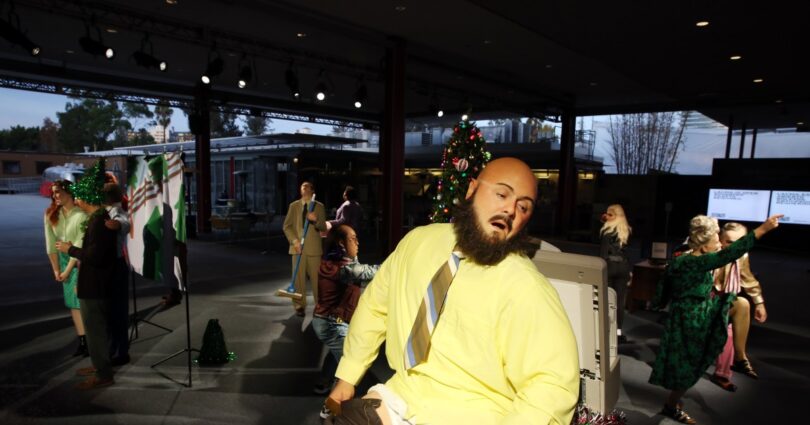 Nothing says office holiday party like a dude planted on the Xerox machine with his pants down, photocopying his butt. But back to that later.

COVID-19 may be surging worldwide and workplaces mostly shuttered, but there’s an office holiday party underway at the Los Angeles County Museum of Art — complete with cringy outfits, watered-down punch and at least one employee in a Santa hat who’s passed out at her desk. And here’s the thing: You’re invited.

On Saturday, LACMA is unveiling the outdoor sculptural installation “Farewell, Work Holiday Parties,” by L.A. artist Alex Prager. The narrative work — on the museum’s entrance plaza, behind “Urban Light” — features 15 eerily realistic, life-size sculpted figures enjoying (enjoying?) an insurance company holiday party in full swing. The HR manager is a DJ — because, of course — and two co-workers are getting down on the dance floor, one kicking up her sandals and showing a little leg, the other with a ‘70s-style ‘stache and wide-open metallic dress shirt. The boss, arms slung around two reluctant employees, is ruddy-faced and jubilant. It’s “The Office” meets “Office Space.”

The piece both satirizes and memorializes that awkward, corporate Christmastime ritual. And it explores the line between fantasy and reality while reflecting our COVID-era world.

“This is a very difficult time and there hasn’t been much humor in the world in the last nine months; it’s been a lot of hatred and a lot of polarization,” Prager says. “Humor is a way to shine light on something that’s not necessarily an easy thing to experience — we can’t have these parties right now, we can’t have any parties — and this allows us to laugh at ourselves.”

“Farewell, Work Holiday Parties” is both typical of Prager’s work and a necessary, COVID-related departure. Not unlike the artist Cindy Sherman, Prager often stages melodramatic narratives, which she then photographs in saturate technicolor. But instead of featuring herself in disguise, as Sherman does, she uses actors in elaborate costumes. For “Farewell, Work Holiday Parties,” Prager, who’s also a filmmaker, worked with the Hollywood effects company Vincent Van Dyke Effects to create the “life sculptures,” as she calls them, instead of gathering actors to photograph in person. She still used actors, but in a very 2020 way: She scanned and printed their body parts at a 3-D printing facility, one individual a time, as she directed them over Zoom.

Some of the printed body parts were used in the sculptures before hair and makeup were applied and skin was painted; then Prager accentuated their features, adding weight to a face with clay or applying a bump on a nose. The hands and feet were sculpted from silicone molds.

The sculptures have skunk, mink and real human hair as well as glass eyes, giving them uncanny depth of emotion. Prager worked with costume designer Jennifer Johnson and production designer K.K. Barrett to round out the work, which is co-curated by LACMA contemporary art curator Rita Gonzalez and an executive administrator in the museum director’s office, Liz Andrews.

The result is very much an ode to old-school, Hollywood practical effects, a discipline that Gonzalez says is “on the verge of obsolescence.”

“Alex just has a special affection, that she broadcasts in her work, for these artisanal, intensely hands-on ways of producing effects as opposed to digital stagecraft,” Gonzalez says. “This piece is evidence of her commitment to that — every detail is hand-rendered.”

And there’s a rabbit hole of detail to descend into: freckles, skin moles and scars, teeth tarter, nose hair and shaving nicks on the necks and faces of figures. Post-It notes on desks bear hand-scribbled messages. A brazen-looking CEO, in a red suit and with martini in hand, has a toe ring and lipstick smeared on a front tooth; a receptionist, clutching her cellphone and in tears, has mascara running down her face. The tiny text messages on her screen show a breakup in progress.

“There’s a lot of raw emotion that I put into this. I really wanted people to be able to find what they love about humans in these cringy moments,” Prager says. “We’ve all shared these moments to one degree or another, moments of connection. And universal connection is found in the details.”

There’s even detail viewers will never see. The guy on the copy machine? Pry back his underwear band and there’s a tuft of fuzzy hair in his butt crack. Sorry, or maybe you’re welcome: Visitors aren’t allowed to touch the work.

“Farewell, Work Holiday Parties” is clearly bittersweet. Who misses the boisterous boss in a Santa suit and the mandatory white elephant gift exchange? Well, maybe a lot of people do now, after months of intermittent quarantining, social distancing and working from home. That’s partly why the work is meant to be an experience, one that’s immersive and layered, Prager says. It’s staged, not coincidentally, in the exact spot where LACMA typically holds its own annual holiday party. The adjacent restaurant Ray’s, which has been closed since May, will reopen Saturday with limited capacity for patio dining; the Coffee and Milk cafe will offer takeout.

Extending the experience, Prager wrote elaborate back stories for each of the characters in an installation booklet, which will be available at a retail pop-up. The chapters, windows into each character’s psyche, are surprisingly entertaining and read like short stories. Wilma, an elder accountant and the office Santa for 11 years running, earlier in the day slipped stool softener into a co-worker’s coffee so that she could steal — and wear — his Santa hat this year.

Prager also made a roughly 1&frac1;2-minute short film featuring her characters that will be posted on LACMA’s website.

“It’s about passing through what you think is a real party happening,” Prager says, “and just when you’re starting to get the feeling that something’s not quite right, you see a feather duster come in and you realize you’re in a museum.”

One lingering question about “Farewell, Work Holiday Parties” is timing: With the virus and death count surging, a new curfew starting Saturday and stay-at-home orders on the horizon, is it smart to encourage visitors to gather at the museum, even outdoors?

Gonzalez says the work will be carefully monitored by member services employees and security guards. A maximum of 12 people will be allowed inside the stanchion at any given time. Visitor traffic will flow one way in and one way out, so that people can circle the work but not enter it.

“People are coming anyway to experience ‘Levitated Mass’ and ‘Urban Light’ — they miss being at the museum,” Gonzalez says. “We’re just so eager to welcome people back, and this seems like the most safe and structured way to do so. It’s a responsible and cautious way to reemerge after having to be so dormant for many months.”

The work is at once of the moment, about the moment and an antidote to the moment.

“We really wanted to bring a lightness to the plaza and this seemed like a beautiful opportunity,” Andrews says. “To allow visitors to have an experience and remember times — whether they’re real or something they saw on television — that are lighthearted and, frankly, accessible from a safe social distance.”

As if the 2020 holiday season weren’t surreal enough already.