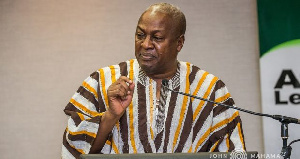 Former President John Dramani Mahama and Presidential flagbearer of the National Democratic Congress has expressed concern about the growing loss of faith and trust in the country’s democratic system.

He described it as a ‘looming danger’ to democracy and could be dangerous to citizens.

He said it was manifesting with apathy towards elections and demands of money and material things in exchange for political support, adding that, monitisation made politics more expensive and continued to fuel corruption in the country.

Former President Mahama shared these views at the 38th anniversary of the 31st December Revolution in Winneba on Tuesday on the theme,“Monetization of Elections in Ghana: ‘A threat to National Development and Genuine Democracy.”

According to him, Ghanaians had become despondent with strong sentiments that no matter what happened, there could be no significant transformation in their lives.

He blamed the practice on the arrogance of power, lack of humility and modesty in public service and waste of national resources by public office bearers and stressed the need to the Country to work towards restoring modesty and humility in government, while identifying with the sacrifices of the people.

“The only means we can bring back the trust of our people and minimize monitisation in our politics is to uphold the revolutionary principles of probity and accountability. We must be prepared to be probed and to be accountable”, He said.

He said there was the need to step up the fight against corruption and nepotism, while strengthening the assets declaration regime of the country.

Mr. Mahama said a new NDC government would seek to review the law and ensure that every public office holder including; the president would declare their assets and publish those assets for all Ghanaians to see.

He urged supporters of the NDC to reflect on the principles of probity and accountability as trumpeted by the 31st December Revolution to work hard for victory in 2020.

He said the 31st December Revolution, which played a pivotal role in the history of the Country, laid a solid foundation for the 4th republic and the formulation of the 1992 constitution.

Former President John Jerry Rawlings bemoaned the level of corruption in the Country saying, “corruption has eaten so deep into the fabric of the masses of our country that it has taken away that team spirit at the grassroots”.

He said it was time the Country drew lessons from the two incidents to reform, transform and improve upon justice and freedom in the society.

He underscored the need to give due respect to all deserving people and not only to people of high social class.