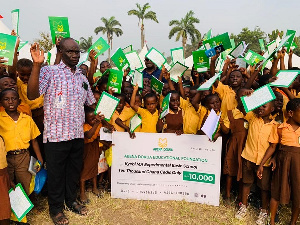 The students with some of the items donated by the Foundation

The Abena Dokua Educational Foundation (ADEF) has supported the Kyebi LA Experimental School with educational materials worth GHC10,000. The ADEF has also donated an amount of GHC10,000 towards the procurement of classroom desks and office furniture for the students and teachers respectively at its annual donation event.

The 7th edition of the event which came off on January 10, 2020 at the forecourt of the Kyebi LA Experimental School engaged teachers and the entire school of about 800 pupils.

President of ADEF, Mr. Kwaku Boateng disclosed that, the Kyebi LA Experimental School was chosen because of the part it played in the life of the ADEF founders who are the children of the late Maame Abena Dokua of blessed memory.

In his speech, the President of ADEF, Mr. Kwaku Boateng, admonished the students to pay attention to their studies.

He stated, “With education, you stand tall, confident, and you gain the ability to do anything you want in this world”.

He emphasized how education is the pillar of the society which is one single thing that cannot be taken away and further encouraged the gathering to find ways to give back to the society.

Mr. Boateng, reiterated ADEF’s commitment to partner the school in their quest to see that all the students attain quality education. There was a chorography dance by the school’s victory dancers that entertained the crowd. Refreshment was also provided amidst dancing by the students. The boy’s prefect, in giving the vote of thanks, assured the crowd of not letting them down. He felt, the gesture and words of encouragement will motivate them to study hard.

In expressing their appreciation for the gesture, Mr. Agbey, headteacher of the JHS, was profoundly grateful. He stated the items will be put to good use by the students and teachers alike.

He used the occasion to invite more benevolence from other stakeholders and dignitaries from the Kyebi.

This year, and as it has been for the last couple of years, Mr. Boateng was accompanied by two of the board members of ADEF, Mr. Collins Owusu and Mr. Kofi Quansah both residents of Virginia, United States. Also present were other founders of ADEF, Mr. Kwasi Akyeampong and Ms. Ama Boatengmaa, both children of the late Abena Dokua.

ADEF is a registered non-profit entity based in Virginia, United States. ADEF primary goal is to champion quality education for students in basic schools in Ghana. Over the years, the foundation has assisted over 2000 students selected from 10 different schools in the Kyebi area. The foundation is on course and seeks to find resources to help other schools in the coming years. The following are the board members of ADEF.