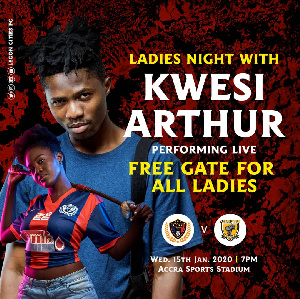 Kwesi Arthur is the next musician to perform after Shatta Wale

Hiplife artiste Emmanuel Kwesi Danso Arthur Junior known in music circles as Kwesi Arthur will be performing on matchday 3 of the Ghana Premier League in the match between Legon Cities and AshantiGold.

The “Woara” hitmaker will be thrilling fans at the Accra Sports Stadium on Wednesday, January 15.

This is the second time an artist will be performing to delight fans at the Accra Sports Stadium after Shatta Wale’s electrifying performance last week in the match between Legion Cities vs Asante Kotoko.

The Legon Cities clash against AshantiGold will be played under floodlights on Wednesday at 7:00 pm.

The cheapest ticket which is for the Popular stand will be selling at GH?10, while the VIP Upper/Lower will goes for GH?25.

For the centre line, the supporters are expected to pay GH?15 for a seat.

Legon Cities ahead hoping to secure their first win as well as hand the Miners they first defeat of the season. Their confidence is high after their stalemate with Dreams FC on Sunday at Dewu.

Coach Goran Barjaktarevic has called on the club supporters to have patience as he builds a formidable squad to mount a strong challenge in the Ghana Premier League.

Legon Cities lie 13th on the standings with 2 points after 3 games.