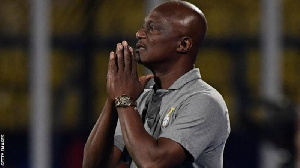 Former Black Stars forward, Augustine has said Kwesi Appiah should have left his position as the head coach of the Black Stars after the 2019 Africa Cup of Nations.

The 54-year-old was expected to leave as the head trainer of the national team after failing to win the 32nd edition of Africa’s prestigious tournament in Egypt.

Ghana was booted from the tournament at the round of 16 after losing to Tunisia on penalties.

However, the former Borussia Dortmund striker believes the former Al Khartoum manager should have left his position after failing to break the 37 years trophyless jinx in Egypt.

“I was not surprised with the decision of the FA,” he said. “I think after the Africa Cup of Nations, he was expecting that he will leave.

“For now, let us welcome the decision by the FA but when it backfires, we will go back and criticize them.

“In my opinion, I would have left my position as Black Stars coach if I were him [Kwesi Appiah] because everyone was calling for his exit but he chose to stay,” he added.

The former Ashgold forward also revealed how the next Black Stars coach will be successful.

“The biggest challenge for the next Black Stars coach is how to scout local players and blend them with the foreign-based players.

“Scouting the foreign players is not a problem but the local players are the future for the various national teams and must be scouted properly so if the next coach fails to do that, then we will go the old way,” he added.