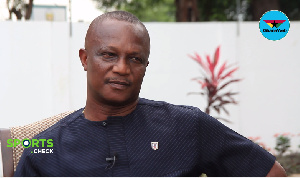 Former Black Stars coach, Kwasi Appiah has been engaged by the Sudan Football Association towards a possible appointment as the new head coach of the Sudan national team.

Coach Appiah confirmed this in a telephione chat with the Daily Graphic yesterday.

According to him, he was contacted by the President of the Sudan Football Association, Kamal Shaddad when the heard that his contract with the Black Stars was over.

“The president contacted me after he heard that my contract with Ghana had ended and engaged me in some preliminary talks,” he revealed.

“There is nothing concrete yet since the talks just began,” he stressed.

It will be recalled that Appiah’s extended contract as the head coach of the Black Stars expired on December 31, 2019 after which the Ghana Football Association (GFA) announced the dissolution of the technical teams of all national sides.

Meanwhile, Kwasi Appiah has since expressed his gratitude to President Nana Addo Dankwa Akufo-Addo and Ghanaians for the opportunity to serve the nation.

Coach Appiah, in a statement released last Sunday, said it was an absolute honour to have had the opportunity and privilege to coach the men’s senior national football team, the Black Stars.

Appiah said he always felt immense pride during his coaching stint which expired on Tuesday, December 31, 2019.

He stated that during his tenure, he laid a strong foundation for “others to build on towards a better future and success for the team”.

“It has been an absolute honour to have had the opportunity and privilege to coach the Black Stars of Ghana,” the statement said.

“I have always felt immense pride in my association with the senior national team, as a player and a coach, and served diligently throughout my coaching contract which expired on Tuesday, December 31, 2019.

“Through the years I was in charge, I worked with my backroom staff to lay the strong foundation required for others to build on towards a better future and success for the team.

“I thank the President Nana Addo Dankwa Akufo-Addo for the opportunity to serve the nation. I also express my appreciation to the Ministry of Youth and Sports, as well as the Ghana Football Association for their support”.

He also expressed gratitude to the general public for the support during difficult times.