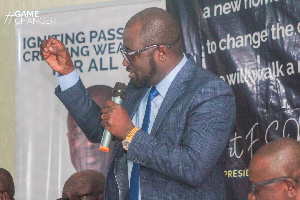 Kurt Okraku has revealed the targets the Ghana Football Association have set to be met by the next appointed coaches of the various national teams.

Ghana have struggled for trophies to come by in recent years and have failed to make a mark in major tournaments.

Due to this, the Ghana FA on Thursday, January 2 dissolved the technical teams of all national teams which the decision affects both male and female national teams.

Speaking on what we want Ghana to achieve in the next couple of years, Kurt Okraku indicated that, the next badge of coaches given the nod to lead the various National teams will be tasked to add to the nation’s laurels.

He added, and the other bit is that we have to be competitive to be able to win. We used to be very dominant at the U-17 level, we used to appear at every U-20 World Cup quite regularly.

U-23 we have always struggled perhaps for reasons that I don’t know, but in the next four years I want us to win trophies and that will be the challenge to all the head trainers that we will be engaging in the next few days not weeks.”