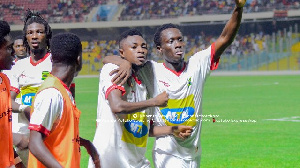 The Porcupine Warriors rallied from a goal down to win the much-hyped league fixture at the Accra Sports Stadium.

Greek-Ghanaian striker Panayotis Papadopoulos gave Cities an early advantage with a goal in the 8th minute.

But Augustine Okrah levelled before halftime as Emmanuel Gyamfi bagged a second-half brace to take all three points for Kotoko.

The pre-match discussion had been dominated by Shatta Wale’s appearance at the stadium. He showed up at halftime and delivered a great performance to thrill fans.

The first half largely favoured each team at different moments. Legon Cities had a promising start to proceedings and were rewarded with a goal by Panayotis Papadopoulos who got into the perfect position to tap the ball into the net in the 11th minute.

Kotoko sought a reply and found it through Augustine Okrah in the 34th minute. The forward got unto a brilliant lofted pass by Sogne Yacouba and dinked the ball over the onrushing goalkeeper Fatau Dauda.

In the second half, Kotoko were the better side. They dominated and deservedly scored two goals courtesy their diminutive attacker Emmanuel Gyamfi.

His first goal came in the 53rd minute when he broke through the defence and placed a low shot into the net. Then seven minutes later, he tapped home from close range after moving into the right channel.

The win takes Kotoko to the summit of the table with six points after their opening day victory against Eleven Wonders.

For Legon Cities, they are still without a win after two games despite all the social hype.