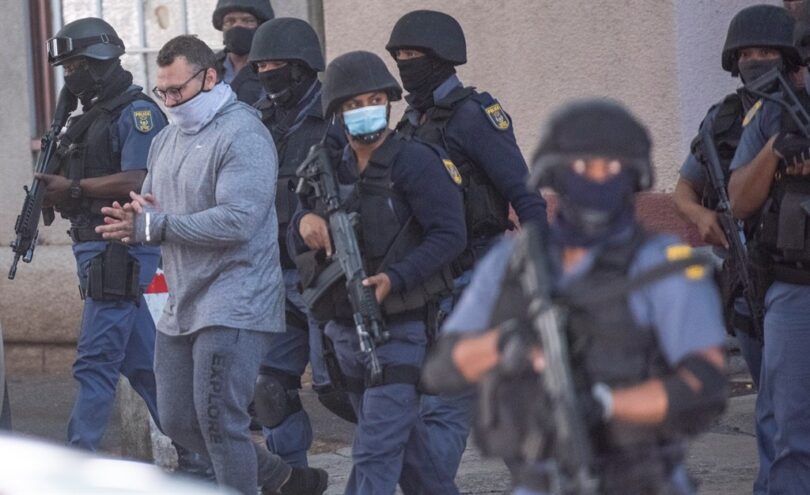 The long-awaited bail application of Charl Kinnear murder accused, Zane Kilian, was delayed again because the prosecutor had to go into Covid-19 isolation.

During brief proceedings in the Bellville Regional Court on Tuesday, prosecutor Blane Lazarus said his colleague, Greg Wolmarans, could not make it after he was identified as a contact of a colleague who contracted the coronavirus. Wolmarans is isolating to see whether he develops symptoms of Covid-19.

The Western Cape’s health department is on high alert after it declared the Garden Route a Covid-19 hotspot recently, and it has warned that the Cape Metro could be in the same position soon.

Kilian appeared in court with his glasses perched on top of his now shaved head, exposing his colourful head tattoos. The doors of the court were guarded again by specialist police officers, who rested their hands near the triggers of weapons that were pointed down.

The bail application was postponed to 8 December and Kilian is in custody.

News24 reported on Tuesday that there was a shooting outside the Highlands North home of a witness in the Kinnear case, who is based in Johannesburg, on Monday night.

The witness is alleged to have supplied the cellphone technology used for tracking or “pinging” the location of cellphones.

On Tuesday, Kilian was expected to give some insight into his side of the story and say how he intends to plead to the charges. Some details of the “pinging” service he used, how he obtained it and why he obtained it were also expected to be made public.

Murder accused, Zane Kilian, will provide the court with an alibi to prove that he could not have been the one who shot Anti-Gang Unit detective, Lieutenant Colonel Charl Kinnear. | @itchybyte https://t.co/h4OFgwysAD

Last week, Kilian’s lawyer said his client was fetching medicine at a pharmacy at the time of Kinnear’s murder on 18 September.

This was after it was found that Kinnear’s phone had been secretly tracked.

In a separate case, Kilian also faces a charge of attempted murder along with four others for a shooting at the home of defence lawyer William Booth in April.

Kilian worked as a private investigator in Gauteng, and was brought to the Western Cape for the Kinnear case after his arrest. He was then joined to the Booth case.