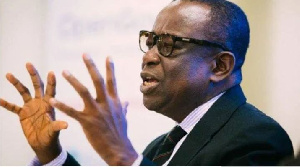 “This matter is an NPP internal fight… the NPP members behind this should stop because it won’t help us” were the words of outspoken NPP MP, Kennedy Agyapong on Oman FM monitored by MyNewsGh.com.

The NPP MP said it is unhealthy for internal fights to degenerate to the level it has wondering how much money could have been involved for the lady at the center of the Kan Dapaah leak to sell him out.

His comment follows a video of National Security Minister Albert Kan Dapaah in a conversation with his side chic that has hit the internet.

In the leaked video, the Minister who was in Europe spoke freely about how he would miss his lover.

“Her pictures are out; it’s possible she will never get a man to marry her. She thinks she’s nailed Kan Dapaah. How much were you paid if you were contracted to set him up?” Kennedy asked.

On a lighter note, he added “I looked at the lady’s finger nails and wondered ‘what could National Security minister be doing with such finger nails?’” he said.

Member of Parliament for Ningo-Prampram Sam George is of the view the Minister of National Security, Mr Albert Kan-Dapaah was set up by persons from within his own party with regard to his leaked amorous video call with an unknown lady.

“State craft on display. Set a man up, play coy, orchestrate calls for his resignation and pressure him to resign. Just so you bring the ‘greater evil’ of the two to control our national security. We live in dangerous times as a Nation,” the lawmaker posted on Facebook.

Musician and politician Kwame Asare Obeng agrees. The political satirist popularly known as A Plus accused bigwigs in the governing New Patriotic Party (NPP) of setting up the Minister of National Security, Mr Albert Kan Dapaah over his leaked amorous video with an unknown lady.

A Plus claims the NPP gurus had schemed a plan of sacking the National Security Minister from office, hence they contracted the lady to record their conversations.