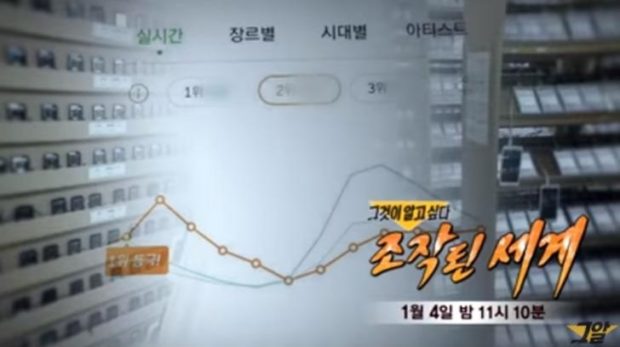 SEOUL — The K-pop chart manipulation issue has once again come into the spotlight, following an SBS investigative journalism show that aired Saturday.

The episode about the controversial issue caused an immediate stir on social media platforms and in search engine trends.

On the latest episode of “Unanswered Questions,” industry insiders highlighted suspicions of music chart manipulation when a song, especially one by a relatively unknown musician, suddenly pops up on the charts without any apparent prior momentum.

The program showed interviews with local musicians who stated that they had received proposals from brokers who had offered to manipulate the charts for large fees.

On the show, an anonymous broker explained how some manipulation is done after viral marketing as a shield to avoid suspicions.

In November, Park Kyung of boy band Block B publicly accused a number of fellow entertainers of chart manipulation via his social media account. One of the musicians Park named appeared on the SBS show to strongly refute the allegations, saying there was not a shred of evidence behind the claims. Park currently faces a series of lawsuits for his accusations.

The chart manipulation issue was first officially raised in 2013 by top local K-pop companies — YG Entertainment, S.M. Entertainment, JYP Entertainment and Star Empire Entertainment — whose CEOs urged a government investigation into the alleged brokers. The case was dropped due to lack of evidence.

The issue of chart manipulation was raised again in April 2018, when bands from the top three entertainment powerhouses — S.M., JYP and YG — all released albums around the same time. Their three bands, who were known to have huge, strong fan bases, failed to top music charts despite the popularity of the albums. This triggered doubts among many music industry insiders and the public as to the veracity of the music charts.

Local entertainment company Limez, which was one of the companies alleged to have manipulated the charts, at the time asked for an investigation by the Ministry of Culture, Sports and Tourism, which concluded that there was lack of evidence.

Don’t miss out on the latest news and information.