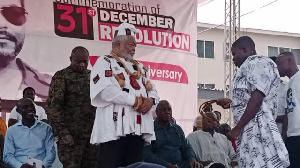 Former President Jerry John Rawlings has described as a calculated attempt by some individuals to distort history and destroy the legacy laid by the June 4th and 31st December revolutions.

According to him, the two interventions were carried out to fix the fragile and volatile atmosphere and restore integrity into the country at the time.

The Former President, who was the architect of the June 4, 1979, and 1981 revolutions made these remarks at a durbar to mark the 38th anniversary of the 31st December Revolution in Winneba on Tuesday.

The celebration was on the theme, “Monetisation of Elections in Ghana: ‘A threat to National Development and Genuine Democracy’.

He said it was unfortunate that some people chose to syphon the negatives, leaving out the gains made by the intervention of June 4 and December 31st.

“In telling the story, the context and the circumstances cannot be discounted or overlooked. An explosion of human race in our history meant to teach us not to treat fellow human beings with disrespect is being distorted by persons who lack credibility”, he said.

He said an important lesson in history was going to be lost on the nation because a handful of minds, full of hate and bitterness were being paid to distort and cover up events in the history of the country with callous stories and lies.

“How can we decline to the extent of losing our morality and sense of discernment in appreciating and identifying people of value and integrity.

Why do we sit and allow these perfidious characters to get away with these lies and deceitful machinations through the power of the media all to the detriment of the nation?” he quizzed.

Mr Rawlings bemoaned the level of corruption in the country saying, “corruption has eaten so deep into the fabric of the masses of our country that it has taken away that spirit that we used to find at the grassroots”.

He said it was about time the country drew lessons from the two incidents to reform, transform and to raise the quality of justice and freedom in the society.

“We have to look into our own history. We have tested it before and it could have been worse if we had lost control. Let us fight against corruption. That fight in itself no matter what provides an air of stability in the country irrespective of the difficulties we are going through”, he said.

The flagbearer of the National Democratic Congress (NDC) John Dramani Mahama urged supporters of the party to reflect on the principles of probity and accountability as enshrined in the 31st December Revolution to work hard for victory in 2020.

He said the 31st December Revolution laid a solid foundation for the 4th republic and the formulation of the 1992 constitution, saying the revolution marked a pivotal moment in the history of the country.