As part of its 50th-anniversary tour, “Jesus Christ Superstar” will appear at the Des Moines Civic Center from Jan. 14 through Jan. 19.

The stage production features music by Andrew Lloyd Webber and lyrics by Tim Rice from the rock opera album musical that reached No. 3 on Billboard’s Top 200 on the week of Jan. 30, 1971.

“If you’re a religious person, you will find a lot of value in it because it’s the story of the final week of Christ’s life told in a modern way,” said Aaron LaVigne, who is playing Jesus in the production.

The themes of the play include love, responsibility, friendship and leadership, according to LaVigne.

“It has a lot of parallels in society because, in our version, Jesus is a singer and songwriter,” he said. “He’s built up by the media, by his fans, by the people who adore him, and ultimately, they’re the same people that destroy him in the end.”

While “Jesus Christ Superstar” is based on the final days of his life, there aren’t direct quotes from the Bible in the play. Most of the musical’s words are sung by the actors.

LaVigne also mentioned that the play does not depict the Western standard of how Jesus looked. “I’m dressed like Kanye West with a man bun,” he said jokingly. 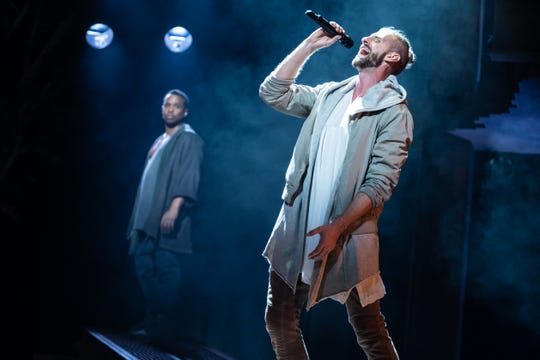 Aaron LaVigne in the role of Jesus while on the set of “Jesus Christ Superstar.” (Photo: Des Moines Civic Center/ Special to the Register)

LaVigne said the audience can “expect a wild ride.”

For the takeaway, LaVigne hopes viewers think about how people treat each other.

Sierra Porter covers entertainment for the Des Moines Register. She can be contacted at sporter@registermedia.com or via Twitter @SierraAPorter95.