It's Miller Time at LACMA: Alex Prager art was made for a beer ad - Republik City News 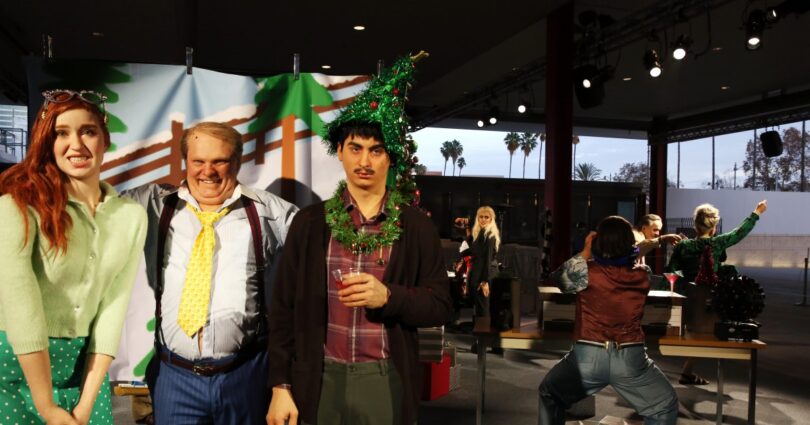 Why is the Los Angeles County Museum of Art exhibiting a selection of props from a beer commercial as a work of art?

And why is it not telling unsuspecting art museum visitors that the “new installation” they’re looking at is really part of a national advertising campaign?

Employees variously dance, weep, guzzle booze, slump at a desk, interact collegially or creepily, and otherwise humiliate themselves for our voyeuristic amusement.

The only thing missing is a lampshade hat — although one hapless fellow is festooned with a small artificial Christmas tree atop his head. (A decorated plastic garland also coils around his neck, though not tightly enough.) He’s woozily posed as if for a cellphone shot with the paunchy boss and a cringing young woman.

The display was timed to coincide with the holiday reopening of Ray’s, the museum’s plaza restaurant, and its adjacent Stark Bar. Both closed months ago due to the raging COVID-19 pandemic. (Still shuttered is the museum itself — or, what remains of it, following the nearly completed demolition of four of the five buildings on the east side of the campus.) Alas, the timing could not have been less opportune.

The very next day, with L.A. experiencing the most troubling spike in infections since the pandemic began, the county announced a public health order closing outdoor dining in restaurants and bars for at least the next three weeks. Prager’s display ends Jan. 3, just two weeks later.

The show is credited to LACMA curator Rita Gonzalez and Liz Andrews, an executive administrator in the museum director’s office. Its theme, however, was the brainchild of the behemoth international ad agency Doyle Dane Bernbach. The company commissioned Prager.

Last year DDB sought to rebrand Miller Lite beer, a product buffeted by competition from the steadily rising craft beer industry. A layer of nostalgia was painted on thick.

The old “It’s Miller Time” beer campaign, conceived nearly 50 years ago for a world of analog conviviality, was revived with a digital twist. A cheerful marketing slogan chirped: “Before there was social media, there was beer at the bar with friends.”

These days, though, beer at the bar with friends has become an ideal way to get infected with a potentially fatal virus. It’s Miller Time to shift promotional gears.

The narrative now unfolding on the art museum’s plaza — as well as in a television commercial starring Prager’s sculpted, social-media-ready cast of blowsy characters — is that some holiday traditions scuttled by the pandemic are best forgotten, specifically the office Christmas party. To hammer the point, the brewery is offering customer rebates on take-home six-packs.

What a difference a year makes in the life of an advertising sales pitch. There’s still beer to be had at home — with or without friends — despite an expanding crisis of infectious disease. Forget the bar. It’s the new Miller Time for Pandemic World.

A visitor to this tacky LACMA display will learn none of this, however. Bland text panels present the ad props as snazzy sculptures.

Prager’s prior work as a photographer and her collaboration here with a movie special effects company are duly noted. A credit line gives DDB a passing mention, along with vague “support provided by Miller Lite.”

Omitting any reference to the brewing company’s ad campaign is like neglecting to mention that Pope Julius II and the Vatican were behind the Sistine Chapel, while Michelangelo was more than just a guy with a paintbrush and a dream.

LACMA has been down this unprincipled road before. Most recently, a solo photography exhibition organized last year by Director Michael Govan was held simultaneously at the museum and a powerhouse commercial art gallery.

Certainly Prager and her pro team have been skillful in crafting verisimilitude for their clichéd cast of world-weary, sitcom-style office characters. The sculptures are acutely observed white-collar descendants of the often working-class figures that artist Duane Hanson began to make in the late 1960s from painted resin, fiberglass or polyvinyl.

While Hanson’s carefully outfitted figures tend to assume static poses, generating double-takes from museum visitors wondering whether the displaced carpenter or flip-flop wearing tourist in their midst might be real, Prager’s tableau subjects are animated in extreme, frozen gestures. No one will mistake a cigar chomping woman who sloshes her martini or a back-slapping boss with his belly popping out from an unbuttoned shirt for living people — except, of course, when looking at them in photographs.

There might have been a way for LACMA to illuminate the photo-determined props the artist crafted for a current TV commercial. Museums mount historical surveys of fashion, furniture, posters and other design merchandise all the time. So why the dodge — or, at best, oversight — here? This “exhibition” of Duane-Hanson-on-steroids is just a misleading slide into simple exploitation of bland mercantile entertainment.

Looking at the sculptures, it’s hard not to wonder, so what? Worse, there is no way to disentangle LACMA from base participation in a beer company’s big-ticket, ongoing advertising campaign. For a major nonprofit cultural institution, what’s the good of that?