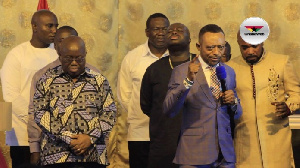 His latest prophecy came after Prophet Badu Kobi had prophesied during his New Year’s Eve Church Service that the President should rest and not contest the 2020 general election else he will die in office just like President Atta-Mills died.

“President Akufo-Addo, go and rest because of health. Otherwise in 2020, one day, the same way I prophesied about President Mills, Ghana will wake up and there will be nobody seated on the seat as President; the person will be no more. It happened in NDC’s time; President Mills was not having strength but they were pushing him…”, he said.

But Rev. Owusu Bempah disputed this revelation by Badu Kobi whom he called his ‘son’ and stated on Accra-based Asempa FM during an interview that his team of prayer warriors are constantly praying for the President to avert any wind of death blowing around him.

“Rev. Badu Kobi may have had this revelation that’s why we’re also praying for Nana Akufo-Addo. He may not be the only person to have had such a revelation but we are praying for the President…If the late Atta-Mills has had a team of prayer warriors supporting him in prayer, he may not have died…everybody prays but who prays with you, who is behind you spiritually…?”, Owusu Bempah quizzed.

“I’ll not doubt what Rev Badu Kobi said but what I would say is that he saw the revelation and I’ve also had such [a] revelation and we’re seriously praying for the president and it won’t happen,” he said.

Rev Owusu Bempah added that if the president will die, he will not die whilst in office but rather after he has served his term as President of the Republic of Ghana because King Hezekiah, who was the King of Judah had a death prophecy but did not die so “Rev. Badu Kobi having a revelation about the president that he is dead doesn’t mean it shall come to pass.”

He noted that the revelation by Rev. Badu Kobi has given him a prayer topic but before he had that prophecy, “I have had it long ago”.

“I started working on it the moment I had such a revelation but Rev. Badu Kobi only saw the later part of what I have been working on all the while,” he indicated.

To Rev. Owusu Bempah, God won’t just take the life of someone whom he has given a great nation like Ghana to govern. “The fact that it happened to Atta-Mills doesn’t mean it will happen to Akufo-Addo because these are two different individuals with different spiritual lives”.

“It will be very difficult for any individual to take the life of Nana Akufo-Addo…whether he (Akufo-Addo) drinks any poisonous substance [or not] he won’t die unless he has served his term as president,” Owusu-Bempah stressed.