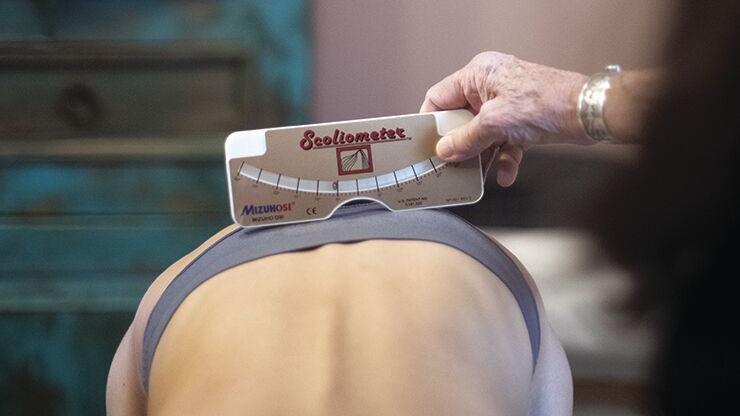 Taos chiropractor Lucy Whyte Ferguson has developed a treatment approach for adolescents with scoliosis based on more than 20 years of practice at Colonias Chiropractic in El Prado.

Now her approach is being considered for a full research study. If confirmed effective, her treatments may help even more young people with scoliosis reduce pain and decrease curvature of the spine.

Ferguson emphasizes that the study will be key to proving that the approach works in a scientific setting. But, she said, “other studies have looked at methods to slow the progress of scoliosis in children, but nothing to date shows a reversal. If the study shows this new approach really works, it will be a revolution.”

“Scoliosis is a sideways curvature of the spine that occurs most often during the growth spurt just before puberty. While scoliosis can be caused by conditions such as cerebral palsy and muscular dystrophy, the cause of most scoliosis is unknown. About 3 percent of adolescents have scoliosis,” according to information from the Mayo Clinic.

Ferguson said that when the cause of scoliosis is unknown, it is called idiopathic. “We do know that the condition can run in families, that there may be genetic factors that affect what kind of soft tissues kids have.” She explained that if the spine curvature gets worse over time, chest capacity can be reduced, causing problems with heart and lung functions as the person reaches age 50 to 70.

How is scoliosis usually treated?

Children with scoliosis are usually observed over time to determine if treatment is necessary, Ferguson said. A brace may be prescribed to stop the curvature from worsening; in some cases, surgery is deemed necessary. Individualized physical treatment plans have also proven useful to reduce the rate of the curvature’s progression.

“I didn’t set out to discover a new procedure for treating scoliosis,” said Ferguson. “I had training in working with soft tissues, but the children’s bodies taught me what I needed to notice to treat them and reduce the progression of their curvatures or reduce the curvatures altogether.”

In her work, she has also been able to reduce the rip hump that can appear on one side of the spine – visible in the back of the body as the child leans forward.

As she worked with children over time at her clinic, she discovered that the muscles that run at an angle to the spine develop tension that cause imbalance. “It is an individual situation for each child,” said Ferguson, “As I work with each one, I have to find the lines of tension. It is no wonder that the spine deviates with the muscles pulling hard on it. The imbalance can cause the pelvis to be lined up incorrectly with one hip lower or the whole pelvis rotated so that one hip is behind the spine, so it doesn’t support the spine well.”

If she pulls too hard the muscle and surrounding tissue known as fascia will resist. As Ferguson explained it, “fascia is like gristle on a piece of meat – it can be around it and also interpenetrate into it; that is how fascia connects up organs and muscles.” In a healthy person, there is a double helix of spiral fascia around the body that helps support it. It appears that in a child developing a curvature, the normal spiral becomes uncoupled and one side starts to contract, contributing to the distortion of the spine.

In combination with treatment appointments, Ferguson may recommend arch supports for shoes or corrective cushions at home. The patient might be asked to lie on a small ball so that it presses into the rib cage where it connects to the spine in order to move it into a better position each day.

Another exercise is to have the child hang onto bar in a doorway. The knees are bent so that their weight helps lengthen and unwind the fascia.

Through this combination of periodic treatments and home care, Ferguson has found she can often stop the progression of the spine curvature or even reduce it.

What will the research study do?

For the study, 56 children ages 10-15 will be selected by Dr. Selina Silva, head of spinal surgery at Carrie Tingley Hospital in Albuquerque. She is looking for children who have a spine curvature of 15 to 30 degrees but no other known conditions.

“I will treat 28 of these children (12 visits for each child over a six-month period) and 28 children will form a control group and they will receive standard care. We will be able to see if I can slow the progression of Adolescent Idiopathic Scoliosis in the research subjects I treat, or even reverse the curvatures and eliminate the rib hump deformities,” explained Ferguson.

If the new treatment proves successful in the course of the study, she hope to be able to treat the 28 children in the control group after the study is done. “I don’t want to leave anyone out,” said Ferguson. “It is hard to have the control group, because the kids are growing, but a control group is necessary to really tell if the treatment is working.”

How will the study be funded?

The University of New Mexico has approved the research proposal to test the protocol in a controlled research study. The proposal was highly ranked and forwarded to the National Institute of Health for final review and approval. Final awards will be announced after the NIH approves the application, possibly by late November.

“I will also be doing fund raising in conjunction with the UNM Foundation, because the research grant does not pay for me to travel to and be in Albuquerque four to six days per month for eight to 10 months, which will be required for me to treat the children who want to be treated in Albuquerque,” said Ferguson.

She also hopes to video the evaluation and treatment procedures for some of the research subjects, which is also not covered by the grant. In addition to asking for individual tax-deductible donations, Ferguson will also be seeking grants from foundations.

If approved, the study will begin on Dec. 1 and run for one year. The treatment part of the study will wrap up within 10 months so that there are two months for analysis of the data by an independent statistician. After the results are clear, Ferguson will be involved with writing about the study, as a way to share the approach.

She hopes the study will published in a well-respected journal such as Spine so that medical professionals and others who work with spines can learn about the approach and consider ways that it might be implemented such as training interdisciplinary teams that include physical and massage therapists and chiropractors.

“This is a huge passion for me,” says Ferguson. “Many people in town have given a lot to me and I’ve tried to give to the community, volunteering at the Taos Pueblo for more than 20 years. This is a chance for the community to support the project. My community has made this whole thing possible. We can be part of sharing a new way of treating scoliosis out into the world.”